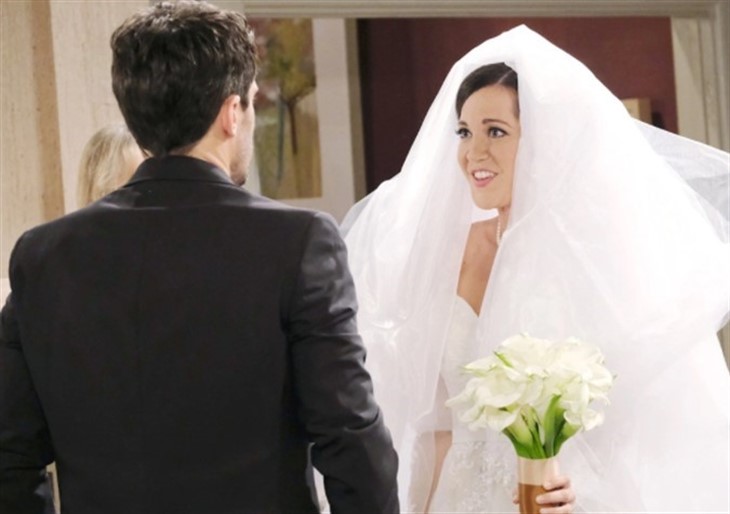 NBC Days of our Lives spoilers reveal that in Salem Heather Lindell is leaving the show after another riveting performance as Jan Spears. This kooky character is always a crack up but fans were treated to quite the vision when she pulled up her bridal veil on Cliffhanger Friday and revealed it was her, not Belle Black (Martha Madison) as everyone expected. Will Shawn Brady (Brandon Beemer) marry the consolation bride?

However this plot ends, Lindell will go out on a high note once again. She recently spoke to Soap Opera Digest about her character and it’s clear that she had as much fun playing Jan this time around as the fans had to watch her.

Days of our Lives spoilers – Heather Lindell is leaving Salem

According to Lindell, Jan threatens to kill Belle if Shawn doesn’t marry her. “She’s very excited on her wedding day … it’s her day.” Well, not exactly!

As Lindell notes, her character is a bit miffed that she must marry the man of dreams in, “Belle’s wedding dress, it’s Belle’s mom’s place … but the most important thing is that she’s marrying Shawn. In Jan’s world that’s all that matters.”

DOOL Spoilers – What Will Jan Spears Do next?

Belle’s family is panic-stricken of course but Belle’s dad urges Shawn to go through with the wedding—traitor! Believe it or not, Belle’s mom Marlena Evans (Deidre Hall) actually marries the two non-lovebirds. But when Jan gets the sense that not all is not kosher, she flips her lid.

Jan tells everyone that she has already killed Belle but it doesn’t work.

The next thing she knows, John Black (Drake Hogestyn) attacks her. As fans know John has been a little wound up since his aneurysm. He has attacked many people in Salem, some a lot less deserving than Jan. As Lindell says, “Before she knows it she is choked. She’s trying to stop him but he’s too strong for her ….”

Is it possible that John’s wrath finally results in fatal harm to a Salemite? He has previously attacked Tripp Dalton (Lucas Adams) but that was stopped by Tripp’s dad. At the wedding, there are a ton of people who stop John, but none really like Jan!

Have we seen the last of the supposedly rehabbed evil doer? Be sure to tune in and find out DOOL fans!