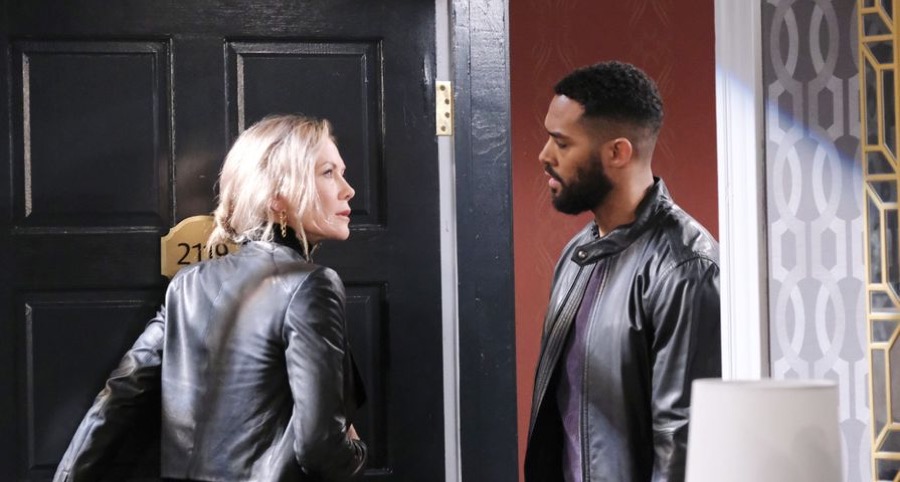 NBC Days of Our Lives spoilers tease that Kristen DiMera (Stacy Haiduk) will shock everyone by pleading guilty! She is being charged with the attempted murder of Victor Kiriakis (John Aniston), and Brady Black, (Eric Martsolf), and Detectives Eli and Lani Price Grant (Lamon Archey, Sal Stowers) have all been trying to help her avoid prison time!

Viewers will recall that District Attorney Melinda Trask (Tina Huang) played hardball with Eli! She had given him a choice between getting a taped confession from Kristen or charging Lani with aiding and abetting, a charge that could not only ruin her career but give birth to their twins in prison!

Melinda plainly has a vendetta against Kristen for her accidentally pushing her daughter Haley Chen (Thia Megia) down a flight of stairs to her death. This was right after she had been told that she and Brady’s baby Rachel Black (Taylor, Kate, and Miller Kamienski) had died. She had been switched with Sarah Horton’s (Linsey Godfrey) baby who died and lived most of her first six months as Mackenzie “Mickey” Horton. Kristen quite literally lost her mind!

She was blind with grief, and when she shoved Haley out of her way as she fled Salem University Hospital, she didn’t even realize Haley was standing at the top of a long flight of stairs! Kristen was gone well over a year, and when the baby switch was revealed, Sarah had also gone on the run and was in Paris, France in Chad and Abby DiMera’s (Billy Flynn, Marci Miller) old apartment there. Kristen found her thanks to Rex Brady (Kyle Lowder) and Sarah sadly handed Rachel over to her real mother.

When Kristen stabbed Victor, it was out of blind rage – she found out he and Xander Kiriakis (Paul Telfer) had been responsible for the baby swap! She again went on the run, and she and Rachel came back for Eli and Lani’s wedding. Now, Eli, feeling guilty comes clean to Kristen about his having secretly taped their conversation – and her confession in it – that he was supposed to turn over to Trask!

Unbeknownst to either Kristen or Brady, while they discuss Kristen coming clean on her own Lani is pleading with Melinda. Eli has told her the bind he’s in – and his fears that Lani will never forgive him for taping Kristen and turning her in. Brady is also at the Salem Police Department, having tried to take the blame for the stabbing himself.

Melinda wouldn’t accept it because of her vendetta against Kristen! Lani actually does seem to make some headway. Although it breaks Kristen’s heart to do so, she decides to confess. She doesn’t want Lani, her best friend, to go to prison even though she doesn’t want to be in prison away from Brady and Rachel. It is a difficult decision, indeed. Kristen has everything she ever wanted – a baby and Brady, who truly loves her.

Having to be on the run isn’t exactly part of her dream of a happily ever after, but she had been willing to in order to not lose Rachel or Brady. Kristen heads over from the Salem Inn, where she and Eli had been talking, to the Salem Police department. She confesses to Melinda right in front of Lani and Brady, even though they tell her not to!

They are actually upset with her but she will not let Lani go to prison! Kristen is hurt by how upset Lani and Brady are with her, but she knows it is what she has to do. She has never made things right that she has done wrong in the past, and now she takes her chance to do so. She knows that she may spend time in prison, and just has to have faith that it’s all going to work out somehow.