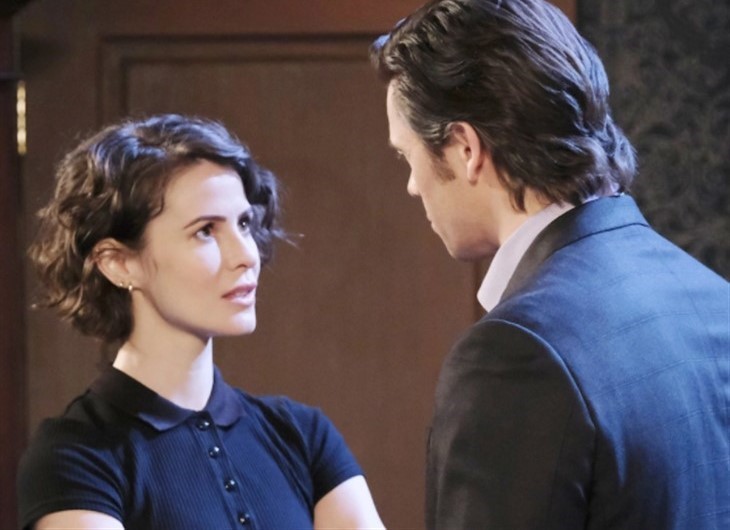 NBC Days of Our Lives spoilers reveal that Xander Cook Kiriakis (Paul Telfer) might pay the price for Philip Kiriakis’ (Jay Kenneth Johnson) arrest. The heir sets up Xander to attack him when he dumps his drink all over Sarah Horton (Linsey Godfrey). Will Salem’s bad boy fall into the trap and get arrested for assault?

DOOL spoilers reveal that Philip threatened Jan Spears (Heather Lindell), but it was for a good reason. Xander just happened to overhear and stepped in to use the threat to his advantage. He encouraged Jan to file a complaint with the police, which led to Philip getting arrested. The Kiriakis heir isn’t going to let this go.

Philip’s issue with Xander isn’t just about Jan’s arrest and it actually goes beyond the CEO position. Philip is scheming with a mystery person to completely take over Titan. This isn’t because he wants to run the company, though. He is still furious with Victor Kiriakis (John Aniston) and wants revenge. The one way to hurt Victor is by targeting his business. It is clear that Philip plans on ruining Titan rather than running it. For this to work, Xander can’t be involved in Titan.

Days of Our Lives spoilers reveal that Soap Opera Digest published a preview picture showing Philip attacking Sarah. Now, he doesn’t lay a hand on the doctor but does hurl his drink so she ends up soaked. It is clear that it is an intentional action with the goal of getting Xander to attack him.

If Xander falls into the trap, he will explode and go into a violent rage, attacking Philip. Once this happens, Philip can have Xander arrested for assault. Then, he not only gets him out of Titan for good… but thinks he will destroy Victor and Xander’s relationship. So, he can continue with his Titan scheme without anyone getting in his way. Plus, if Xander does figure it out and tries to alert Victor, all Philip has to say is that it’s a game to get his job back.

Days Of Our Lives: No Episodes Thursday Or Friday, DOOL Preempted For Alternative Programming https://t.co/HuOGBH2sPM pic.twitter.com/ANcye5t2nf

Even though Xander would easily fall into this trap, Sarah is more logical. She will likely know that something isn’t quite right when Philip purposely dumps his drink all over her right in front of Xander. Can she stop Xander from being played before it’s too late?