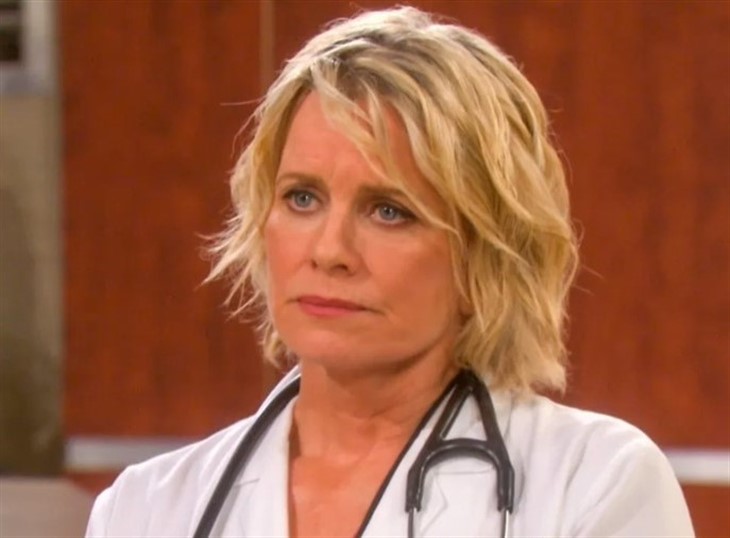 NBC Days of Our Lives (DOOL) spoilers for next week of October 26 reveal that Dr. Kayla Brady (Mary Beth Evans) is going to be absolutely thunderstruck. She ends up finding out about Dr. Wilhelm Rolf’s (William Utay) newest scientific endeavor. Now, the man brings back people from the dead and has implanted the “essence” of his deceased boss in others. What could he come up with next?

DOOL spoilers reveal that through the years, Dr. Rolf has done some shocking and horrific things. They were usually for his employer, Stefano DiMera (Joseph Mascolo). He’s been able to bring back some people from the dead — only under certain conditions, of course.

He also implanted Stefano’s “essence” in Steve “Patch” Johnson (Stephen Nichols). He’s a pro at brainwashing and psychological manipulation. Kidnapping, holding people hostage in towers and dungeons, as well as switching identities and high-tech masks were just a few of the things he has done.

During the week of October 26, Dr. Rolf will make an announcement. He will unveil his latest scientific endeavor. We have to assume it’s nothing good, but what is this regarding? How will it change the lives of the people in Salem? Plus, why would the mad scientist reveal it to Kayla? Since it’s getting close to the Halloween episode, we have to assume that this must be part of it.

Days Of Our Lives Spoilers – Undying Loyalty to Stefano DiMera

Days of Our Lives spoilers reveal that one thing that has remained constant about Dr. Rolf through the decades is his devotion. He has always been — and always will be — loyal to Stefano. It doesn’t matter if Stefano is dead or not, Dr. Rolf has never accepted the DiMera patriarch as being really gone.

DOOL Spoilers & Updates – What Could Be Next?

Considering that Kayla is “thunderstruck,” a new scientific endeavor, his devotion to Stefano and it being Halloween, it really brings us to one conclusion. That this has something to do with Stefano, but what exactly? What could actually surpass the resurrection injection and brain implants? Well, we will have to keep watching the NBC soap opera to find out.

Days Of Our Lives Spoilers: Clyde And Orpheus Form An Uneasy Alliance As They Join Forces https://t.co/J8h67otVIl

Tell us your best theories on Dr. Rolf’s newest scientific endeavor. What do you think it is and what would cause Kayla to be thunderstruck?