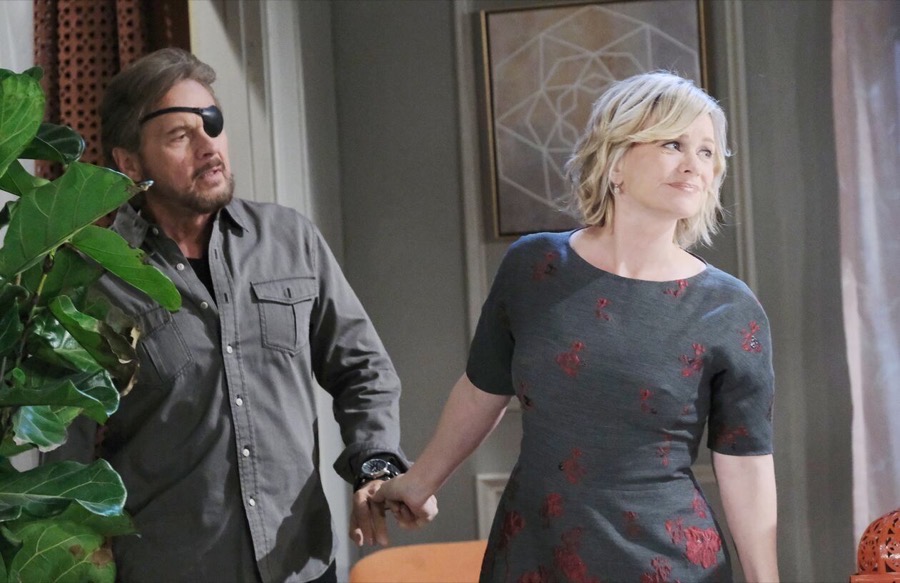 NBC Days of Our Lives spoilers tease that Kayla Brady (Mary Beth Evans) and Steve Johnson (Stephen Nichols) are keeping a secret from Tripp Dalton (Lucas Adams)! It is a Salem secret that could split father and son if Tripp knew!

Tripp is way too old to have a parent overrule his decisions, but when Kayla suggested a DNA test Steve pulled the parent card and “borrowed” his toothbrush! Both he and Kayla found it odd that Tripp would refuse a test that could rule him out as the father of Miles Horton (Jayna and Kinsley) Fox. It would, after all rule him out as the rapist of Allie Horton (Linsday Arnold) as well! If Tripp doesn’t match Henry when a paternity test is done, he certainly couldn’t have raped his mother!

Steve reasoned Tripp was just scared, and maybe wasn’t thinking too clearly. Tripp told him later that everybody in Salem believes he is a rapist, Kayla included. Steve started to tell him the story of what happened to Kayla with Jack Deveraux (Matthew Ashford) years ago, but Tripp already knew. That’s why he felt that Kayla would automatically side with Allie over him. Maybe Tripp was concerned Kayla would skew the results of the paternity test because of her past with being raped by Jack, but if he was, he didn’t tell his father. That would have made sense, however as far as a reason for his refusal to submit to the test.

Steve had the toothbrush in a baggie in his pocket as Tripp has come home, saying he was out at the lake all night and apparently lost track of time. Kayla had gone by that time, headed for Nicole Walker Brady’s (Arianne Zucker) apartment to get a sample from Henry. Steve may have been wondering what he would say to Tripp if he happens to use the bathroom and finds his toothbrush missing! Steve will have to find an excuse to meet up with Kayla at the hospital if Tripp hangs around much longer.

He tries to calm his son down, especially since he had to restrain John Black (Drake Hogestyn) from beating him within an inch of his life, which it certainly had appeared John wanted to! Steve will likely tell Tripp it may be best if he lays low and doesn’t try to go out and interact with folks until it’s straightened out. He will also tell him not to go off halfcocked like he did to confront Allie! That could have definitely hurt his case – Steve already told him he could have been taken as trying to intimidate her! The last thing they need is for Tripp to make himself look guilty!