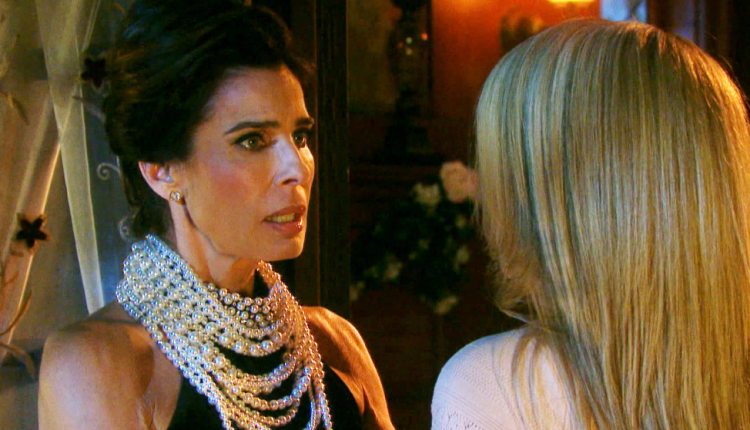 Days of Our Lives spoilers reveal Jack Deveraux (Matthew Ashford) and Jennifer Horton (Melissa Reeves) learn the truth about the night she fell from the balcony. However, which woman will be arrested, if either of them is? The body belongs to Hope Brady (Kristian Alfonso) but the crime was committed by Princess Gina. How will there be justice for the nearly fatal act?

DOOL spoilers indicate it was just over one year ago when Jennifer was pushed from the balcony after getting Dr. Rolf’s (William Utay) flash drive cracked open. However, it wasn’t the mad scientist who pushed her. It also wasn’t Eve Donovan (Kassie DePaiva), who was blamed for the crime.

After Jennifer fell into a coma, the truth would remain hidden and Eve would have to spend her time behind bars. At one point, Eve reached out to Jennifer’s daughter, Abigail DiMera (Kate Mansi). She wanted the reporter to investigate and help clear her name. While she was released early, the truth wouldn’t come out until now.

Days of Our Lives Spoilers – Learning the Truth

Days of Our Lives spoilers confirm Princess Gina was the one who tried to kill Jennifer that fateful night. At one point, Stefano DiMera (Stephen Nichols) tried to interfere in the investigation when “Hope” was forced to reopen the case. However, fans remember watching Gina push Jennifer and take the flash drive to protect her secret.

It is confirmed that in the upcoming week, Jack and Jennifer will finally learn the truth about that night.

DOOL Spoilers – Who Will Pay the Price?

This is a complicated situation because Dr. Rolf transformed Hope into Gina. So, while it’s Hope’s fingerprints, face, and body, Gina is the one that is making the decisions and living her life. So, who ends up paying for the crime of attempted murder?

One day, the real Hope will be back and it wouldn’t be fair for her to pay for Gina’s crimes. It seems that this will be one case in which everyone learns the truth, but nobody goes to prison. To find out, fans will have to keep watching the NBC soap opera.