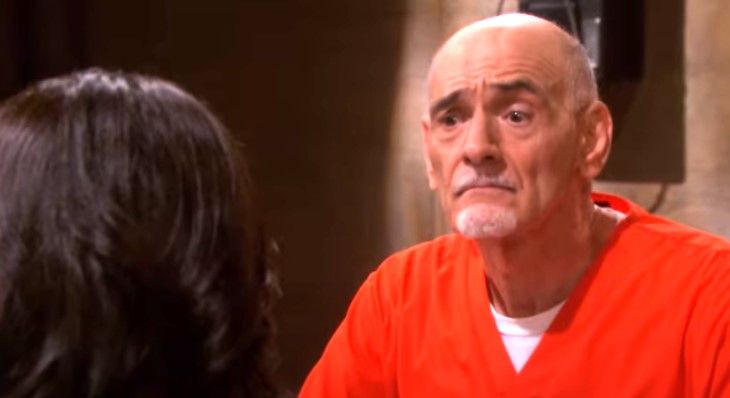 NBC Days of Our Lives updates and spoilers reveal that Dr. Wilhelm Rolf (William Utay) made a deal with Gabi Hernandez DiMera (Camila Banus). She honestly believes the mad scientist’s story about Jake Lambert (Brandon Barash) being Stefan DiMera. However, is he being honest? His chuckle and statement after Gabi left indicate it’s all just another cruel mind game.

DOOL spoilers reveal that on Wednesday’s episode, Gabi visited Dr. Rolf in prison. He was surprised to see her. She immediately demanded to know the truth about Stefan. At first, he had no clue what she was talking about. He reminded Gabi that nothing could be done for Stefan due to him being declared brain-dead.

However, Dr. Rolf quickly discovered that there is a lookalike in Salem and Gabi was desperate enough to believe anything. It seems that he is taking her on a cruel ride.

During the episode, Gabi and Dr. Rolf struck a deal. What does he want more than his freedom? Of course, his prized project, the resurrection injection. As fans know, he came back from the dead before due to the serum. Dr. Rolf could easily just plan to kill himself, have his dead body taken out of the prison, and eventually, he would wake up due to the injection.

Days of Our Lives Spoilers – The Serum Makes A Comeback

Days of Our Lives spoilers reveal that Gabi is more determined than ever to help Jake remember that he is Stefan. However, she believes that can’t be done unless she gets her hands on the special serum that helped Jack Deveraux (Matthew Ashford) and Will Horton (Chandler Massey) remember their identities.

After Gabi left, Dr. Rolf sinisterly chuckled and commented that it wouldn’t be easy for Gabi. It seems clear that it’s just a scam. Plus, there is one element that is missing here. If Jake is really Stefan, then what was the deal with his heart being donated to Julie Williams (Susan Seaforth Hayes)?

It all seems rather convenient. Perhaps Dr. Rolf is working with Vivian Alamain (Louise Sorel)? Was that who Jake was talking on the phone with about the plan getting way more complicated? This is simply too easy and there are some red flags that suggest that is a much bigger story here than just another resurrected amnesiac. We will have to keep watching the NBC soap to see how this storyline develops.

Prince Charles And Camilla Thank Everyone At Royal Mail For Their Hard Work, Dedication & More