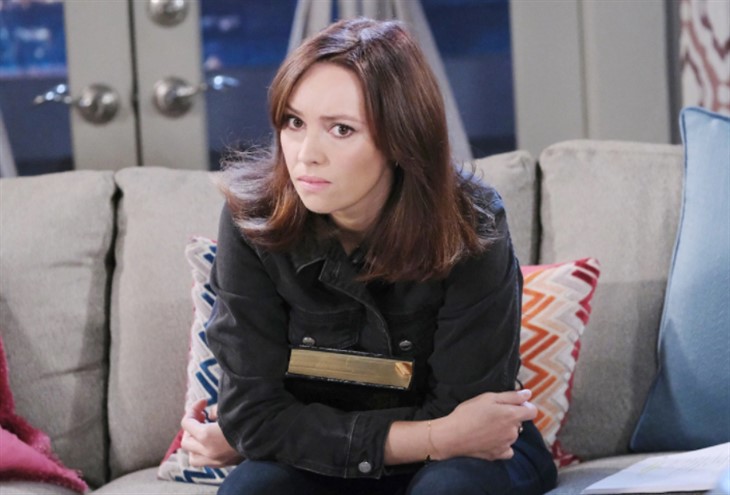 Days of Our Lives spoilers reveal that Gwen Rizczech (Emily O’Brien) isn’t just after the DiMera fortune. She has a far more personal reason for injecting herself into the family’s lives. A traumatic past hides a tragedy that pushed her to seek revenge and it is very personal. But who is her actual target? What happened that makes Gwen so angry and messed up?

Days Of Our Lives Spoilers – Gwen Rizczech: Too Many Coincidences

DOOL spoilers reveal that there are just too many coincidences when it comes to Gwen. She faked a breakdown and befriended Claire Brady (Isabel Durant). She followed Claire to Salem and stole from the mob knowing they would go after her ex, Jake Lambert (Brandon Barash). He just happened to be a secret DiMera twin who became Gabi Hernandez DiMera’s (Camila Banus) obsession.

Chad DiMera (Billy Flynn) sat next to a sloppy drunk and bonded over hating Gabi. Now Jake and Gwen are in the DiMera mansion. There’s spying, secrets, and seductive scheming going on. We learned she is the one who drugged Abigail DiMera (Marci Miller). These two have a prior connection we don’t know about yet. They spend a lot of time huddled together and whispering. Chad wouldn’t trust a stranger with so much information and his behavior is “off.”

Gwen has all the signs of someone who has anxiety and depression. Her nerves cause constant nail-biting and she is always pulling her hair. She guzzles bottles of liquor to numb her pain. In front of others, she is a hot mess, but not too much. When Gwen is by herself, the emotional anguish she feels is all over her face. It is clear that she is dealing with some sort of trauma. It also explains her explosive anger and her knee-jerk reaction to everything. There are clues that Gwen’s motivation is revenge and Abigail is being targeted for a reason.

Gwen has clearly injected herself into the DiMera orbit for a reason. We don’t think her prime motivation is money, but revenge. The only person she has tried to actually harm is Abigail and it must be for a reason. Could Abigail have caused some sort of tragedy during one of her mental breakdowns? Perhaps when she was behaving recklessly while her alternate personality, Gabby aka “Gabigail” took over? Whatever Abigail did, it resulted in a tragedy and possibly the death of someone Gwen cared about.

Days Of Our Lives Spoilers: Tripp And Claire’s Romance – Ben’s Connection To Storyhttps://t.co/9gpC1Z9KiI

It was previously teased that Gwen’s hidden agenda would be revealed later on. It seems that we are getting closer to finding out the truth. We hope that Abigail survives Gwen’s sinister scheme. Unfortunately, we think there might be a chance that Chad is on the plan. To find out for sure, we will have to keep watching the NBC soap opera.