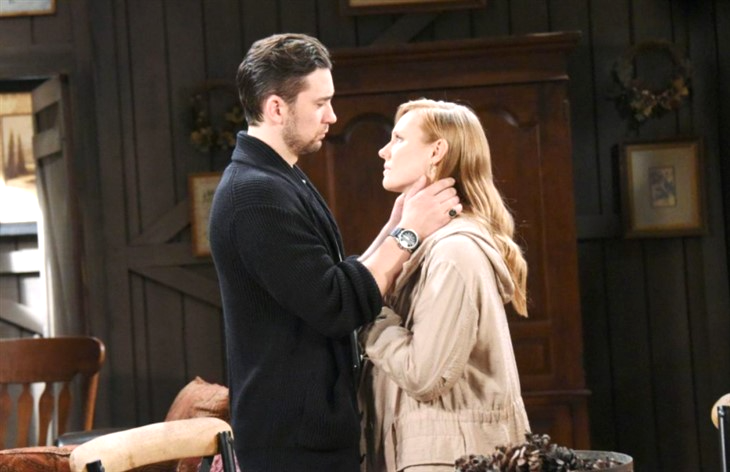 NBC Days of Our Lives spoilers reveal that Chad DiMera (Billy Flynn) has been acting really strange since he came back from Florida. Now that Abigail has also returned, it seems like she is up to something. Almost as if she’s scheming or fishing for information. What exactly is going on with “Chabby?” Is there a huge shock coming up that will explain what is going on?

Days Of Our Lives Spoilers – Abigail DiMera’s Drugging and Hallucinations

DOOL spoilers reveal that Abigail was doing well after being treated for dissociative identity disorder (DID). However, her hallucinations returned when she was drugged. It wasn’t even on the market yet but was being developed by DiMera Enterprises. Gabi was accused of the crime and went on trial. Even though Gabi was not convicted, Chad continues to insist she is guilty. However, Abigail seems to believe that someone else might be responsible.

Chad didn’t go through a complete personality change, but there are enough subtle differences to know something isn’t right. Plus, there is him working with Gwen Rizczech (Emily O’Brien)., who has too many DiMera coincidences. Chad’s approach, discussion, and partnering up after “first meeting” Gwen is odd. Since when does Chad sit next to a drunk stranger, talk about his enemy, and within minutes take that person home with him? It’s really out of character for Chad.

Days Of Our Lives Spoilers – Chad DiMera Seems Off

Days of Our Lives spoilers reveal that Chad might be worried about Jake Lambert (Brandon Barash). While he doesn’t give the impression of wanting the CEO position, Jake was also cozying up to Gabi, so that might make Chad worry.

When Abigail returned from Florida, one would think Chad would be happy his wife was home. He questions why she is there and that could be due to him believing she’s not stable yet. But he just didn’t seem happy to see her, almost like she was an intruder or ruining some plan.

Abigail’s return had her asking Chad questions. We don’t think it really had to do with Gwen, though. The way she looks at Chad, the careful pauses, and the questions she asks seems more like she is fishing for information. She is an investigative reporter and her demeanor seems like she’s on a case, not reuniting with her family.

What do you think is going on with “Chabby?” Have you noticed Chad DiMera’s odd behavior since Gabi Hernandez DiMera was acquitted? What do you think of the way Abigail DiMera acted when she came home? Is there some grand scheme at work and if so, who is playing who? Or are Chad and Abby both playing each other?