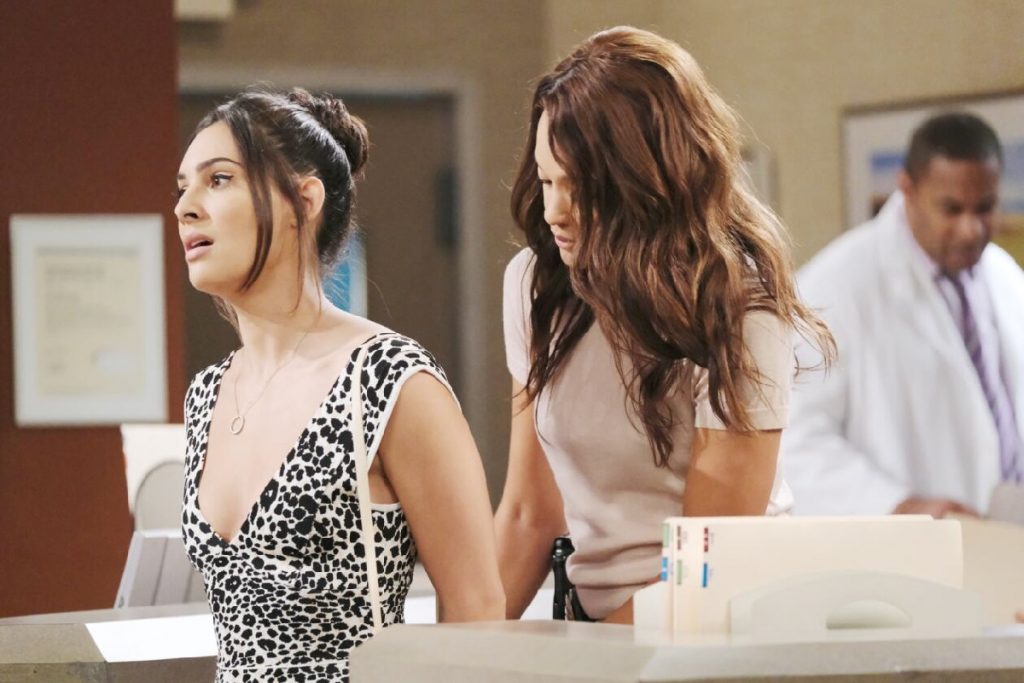 NBC Days of Our Lives spoilers scoop reveal that there is a bit more information about Jake Lambert’s (Brandon Barash) past. His former flame is named Gwen and is a mischievous type of gal. In order to stop the men chasing Jake, he has to track down his ex-girlfriend. Meanwhile, Gabi Hernandez DiMera (Camila Banus) gets in trouble due to her constantly stalking the mechanic.

Days of Our Lives Spoilers: Obsessed With Stefan DiMera Theory

DOOL spoilers reveal that ever since Gabi saw Jake, she has believed he is her dead husband. She has all kinds of theories about what is really going on, but refuses to believe that Jake’s just a lookalike. It’s not just the mechanic’s face that reminds her of Stefan DiMera. It’s also his hands… to Gabi, Jake’s hands are exactly the same as Stefan’s in every possible way.

Even though Jake keeps insisting that he is not Stefan, Gabi continues chasing him down. She lashes out at him, tries to convince the mechanic he is really Stefan, harasses him, and stalks the poor guy. She even tried to inject him with Dr. Wilhelm Rolf’s (William Utay) serum without his permission.

Days of Our Lives spoilers reveal that this summer, Gabi will continue pressuring Jake. However, he doesn’t want her help and is pretty close to getting a restraining order. Due to her constantly chasing down Jake, she ends up in a dangerous situation that has to do with these men that are after Jake.

According to the latest issue of Soap Opera Digest, summer preview spoilers reveal that Jake needs these thugs to stop. In order to do that, it means he has to find his ex-girlfriend, Gwen. Now, Jake has mentioned a former flame, but never said her name. All he would tell Ben Weston (Robert Scott Wilson) is that she would drive him crazy. It sounds like Gwen and Gabi have a lot in common!

Did Gwen get involved with the wrong people and that’s why they are after Jake? Or is she a dangerous woman who Jake has been running from? The thugs wanted something they think Jake has, but we don’t know what. It sounds like it is an object rather than money. It seems to be valuable enough to have thugs attack with a crowbar. To find out the backstory of Jake and Gwen, we will have to keep watching the NBC soap opera.