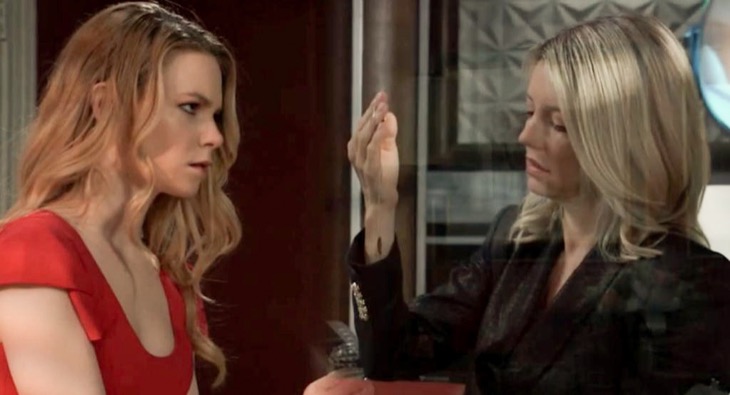 General Hospital spoilers tease that Nelle Benson (Chloe Lanier) is on a roll, collecting humans like a kid collects marbles. Who will she bring over to the dark side next?

Right now she has Julian Jerome (William deVry) dangling like a puppet from a string. But before long she could have another person on her side making her a very formidable enemy to have in Port Charles.
Who will Nelle go after next?

General Hospital spoilers – Nelle is capable of pulling any stunt

Right now Nelle has won the battle but she probably needs another gun to win the war, the custody fight she is waging against Michael Corinthos (Chad Duell).

She got a leg up when she convinced Julian to marry her. Actually it was blackmail, but he agreed to marry her in order to save his life. Crafty Nelle got some good dirt on the pub owner and the next thing you know he’s sitting beside her in court.

But he alone can’t make Nelle look like a saint, she’s needs some more ammo, someone else a bit less salacious than Julian to vouch for her. And she’s already started her plan to ensnare her next victim.

Nelle’s boss, Nina Reeves (Cynthia Watros), is halfway to Nelle’s side. She feels sorry for the young, unwed mother and wants to help but her friends are demanding she doesn’t.

Viewers now know that Nelle is her daughter thanks to some, especially explosive show spoilers. What happens when Nina and Nelle find out?

General Hospital spoilers – Nelle is the cat who got the cream

As long as Nina is in the dark about Nelle’s DNA, she will continue to evade her pleas to help her. But once the truth comes out, Nelle will have Nina right where she wants her.

Rumor has it that Nina will be so desperate to please her daughter that she is willing to do anything to make her happy. Nina was dealt a low blow when she was deceived about Sasha Gilmore (Sofia Mattsson) being her daughter.

To this day Nina feels the loss and continues to grow more and more determined to find the daughter she never knew. Imagine her joy when Nelle turns out to be the answer to her prayer.

But there will be a price to pay and according to speculation, Nelle will force Nina to do something very dark before she accepts her as her mother!

General Hospital (GH) Spoilers: Nina Has Regrets, Blames Herself For Not Being A…