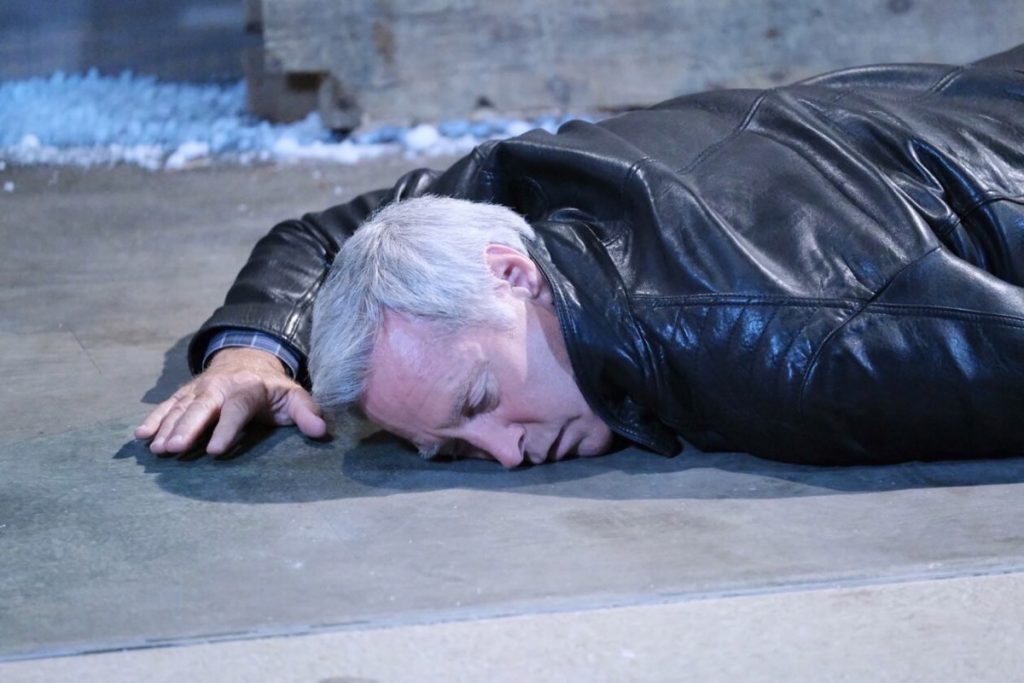 Days of Our Lives viewers will recall that Stefano DiMera (Stephen Nichols) had demanded ten million dollars and delivery of Marlena to him from Justin in exchange for Kayla, who he had kept hostage ever since he stumbled into Salem University Hospital with a gunshot wound suffered into a struggle with his son, Chad DiMera, (Billy Flynn) over the gun. Stefano had waited for her in her office and later demanded that she continued to hide him, which she has been doing ever since in some kind of storage shed.

Meanwhile, at Salem University Hospital, Chad, who has been drugged bit by bit over the last week by Stefano, who has been hiding in the secret passage in DiMera Mansion and coming in with Chad unawares, prepares to carry out his father’s deadly wishes by attempting to smother Gabi Hernandez DiMera (Camila Banus) with a pillow! Luckily, the bone marrow that Gabi promised to save the life of baby Mackenzie Horton (Josephine and Rosalind May) has already been extracted and Gabi is in recovery – but not for long, if Stefano has anything to say about it!

He has made his son his new pawn by drugging him and then giving him assassination orders which he cannot help but comply with! Chad probably has been stressed by Gabi to the point of wanting to murder her anyway, but in his right mind, it never would have gone beyond morbid daydreams!

Julie Williams (Susan Seaforth Hayes) blasts Gabi for her actions – namely, her having bargained the life of a baby, Mackenzie, in exchange for her freedom; in other words, the strings attached to her donating her bone marrow. To Gabi’s credit, at least she did keep up her part of the bargain, but it truly is a monstrous – or a desperate – person who would in essence, hold a baby’s chance for life hostage!

Days of Our Lives viewers can expect quite a tirade from Julie to Gabi about this subject, with probably a review of every horrible thing that Gabi has ever done and re-blasting here for those!

Eli Grant (Lamon Archey) and Lani Price (Sal Stowers) find their reunion interrupted by unhappy news, which likely is the news that Gabi’s criminal charges were dropped! They will be upset considering that Gabi could have donated her bone marrow and still gone back to jail once recovered to await her arraignment! Bone marrow extractions are beyond the expertise of the medical personnel in Stateville Prison, but she could have been transported and escorted back and forth under armed guard!