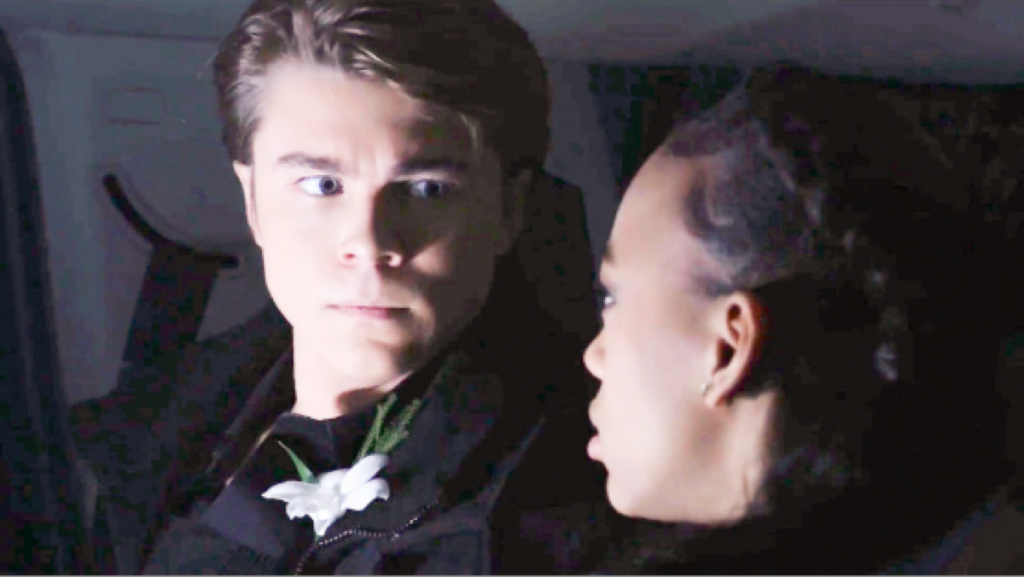 Welcome to your Thursday March 5th General Hospital (GH) recap! We begin our day at Elizabeth Webber’s house where Cameron Webber (James Lipton) is on the couch having a nightmare about the kidnapping and shooting. He awakes suddenly as his mom Elizabeth Webber (Rebecca Herbst) asks if he is okay.

At the Metro Court restaurant, Sam McCall (Kelly Monaco) is getting texts from Damien Spinnelli (Bradford Anderson). He says his eyes are on the target, Peter August (Wes Ramsey).

In the Port Charles park, Damien Spinnelli (Bradford Anderson) hides behind some bushes and watches Peter August (Wes Ramsey) who is alone. Suddenly his mom Anna Devane (Finola Hughes) shows up and says the WSB has contacted her about him. In the bushes, Spinnelli is grabbed by Liesl Obrecht (Kathleen Gati).

Liesl wonders what she has stumbled upon and he makes up a lie, but she figures out he’s stalking Peter. Spinnelli explains to Liesl about the baby switches and the subsequent arrests which makes her nervous.

GH Spoilers – Nelle Benson drops a bombshell at the courthouse

Michael says she has no grounds to sue for full custody, but Nelle protests that the Corinthos family is too dangerous for a baby. Carly continues to screech at Nelle about all of her crimes.

Jordan Ashford (Brianne Nicole Henry) is livid when she realizes Curtis has shared classified information about her involvement in bringing down Cyrus Renault. Sonny says the connection is now in the open and maybe they should all join forces.

Jordan says shes absolutely not working with a mobster and storms out of the office.

Trina Robinson (Sydney Mikayla) comes downstairs from resting and Elizabeth says her mom’s flight was delayed, but she’s on her way. Cameron asks Trina how she is doing and she can’t believe her dad is gone.

There’s a ring at the door and its Ava Jerome (Maura West) who offers her sincere condolences to Trina. Ava asks how she is feeling and has brought her some cookies for comfort.

Anna tells Peter that the WSB has information on him as he flashes to his discussion with Liesl. Anna asks about a shady industrial company that Faison was involved in.

Molly tells Sam that she said no to TJ’s wedding proposal and he never came home.

Trina’s mom Portia Robinson (Brook Kerr) arrives to comfort her daughter. She meets Ava who is very protective of Trina. Portia makes it clear that Trina is her daughter and she can take care of her. Nikolas comes over to the Webber house and gets into it with Franco.

Curtis and Jordan argue about her safety and the safety of her son TJ. Obrecht confronts Nelle and makes it clear where she stands about the baby switch. Suddenly Anna busts in and says “she has not gotten away with it” …………flash to preview