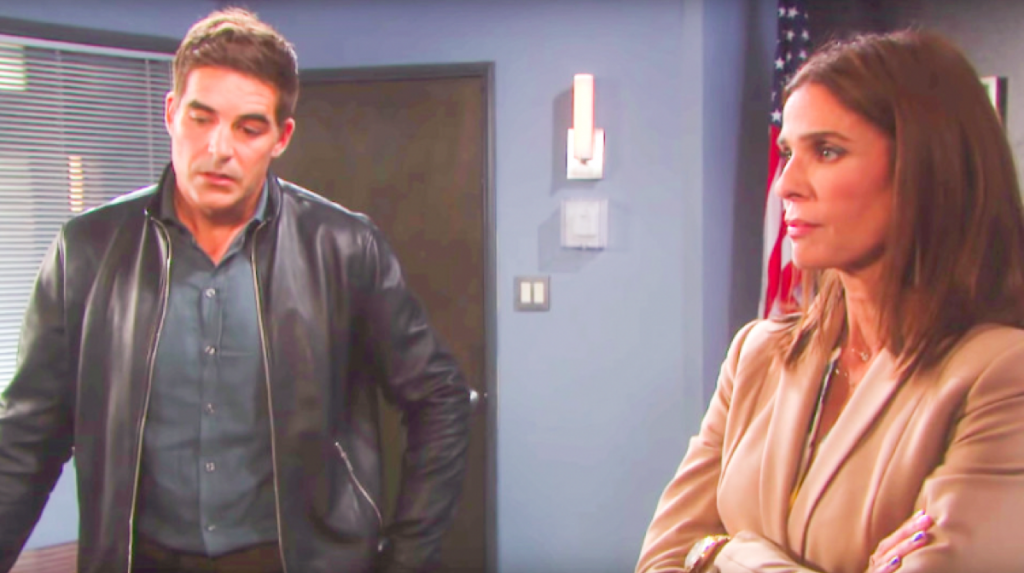 However, by the time they arrived to help John, Gina had disappeared, with Marlena Evans (Deidre Hall) apparently in tow! Gina will play a game of cat and mouse with Rafe, but where is Marlena? Hopefully, she got away to return and help Kate with John!

Meanwhile, back in Salem, Chad and Abigail DiMera (Billy Flynn, Kate Mansi) get locked inside Gina’s lair after a confrontation between Chad and “Steveano” DiMera (Stephen Nichols) after they discovered him trying to choke the life out of Hattie Adams (Deidre Hall)! Stefano had pulled a gun on Chad and Abigail and had threatened to kill Abigail and Chad charged at him, and in the process, Stefano is shot but escapes, locking the others inside the lair!

“Steveano” makes his way to Salem University Hospital, where he seeks help from Kayla Brady (Mary Beth Evans) for his gunshot wound. This may be awkward, but Kayla as a medical professional swore to do no harm so she will treat his wound and help him out.

He will tell her he’s after Stefano, who shot him and ask her to keep her treatment of him for the gunshot quiet so as not to attract Stefano to the hospital. It will be awkward indeed for Kayla – and more awkward for Stefano when he answers a question about something in Kayla and Steve’s past incorrectly!

After over a year, and one year of it in a coma, Jennifer Deveraux (Melissa Reeves) finally gets the rest of her memory back and recalls it was “Hope” who pushed her over the balcony of “The Bistro) on her wedding day! If her complete memory is back she should also recall that “Hope” was not herself and that she had discovered

Hope had been turned into Princess Gina by Dr. Wilhelm Rolf (William Utay) – which was undoubtedly revealed on Rolf’s flash drive that the two women were struggling over after Jen popped it into a laptop that happened to be set up at The Bistro, probably with music programmed for what was supposed to be Eli Grant (Lamon Archey) and Lani Price’s (Sal Stowers) wedding reception, which she and Jack Deveraux (Matthew Ashford) and Justin and Adrienne Kiriakis (Wally Kurth, Judi Evans) were going to use for their joint wedding reception after their joint wedding, after Eli offered it to them after Lani dumped him at the altar after being blackmailed by Gabi Hernandez DiMera (Camila Banus).

The Bold and the Beautiful Spoilers: Katie Tells Bill All About Sally’s Secret – Fashion Designer Betrayed