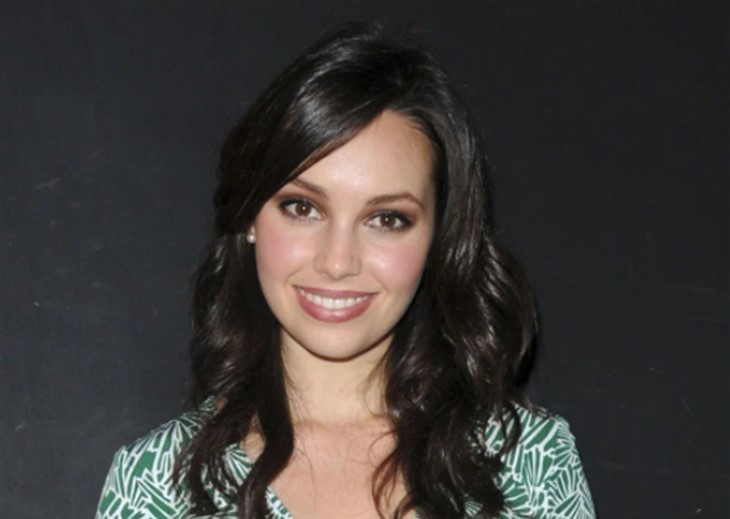 Days of Our Lives spoilers reveal that Gwen Rizczech (Emily O’Brien) has some pretty fancy scenes coming up in the near future. So, even if Chad DiMera (Billy Flynn) and Abigail DiMera (Marci Miller) learn the truth about Gwen, she’s still staying in Salem and is dressed up for what appears to be a very fancy engagement.

Days Of Our Lives Spoilers – Emily O’Brien Not Going Anywhere

DOOL spoilers reveal that despite Gwen being up to no good and even drugging Abigail, don’t expect her to go anywhere. She was part of the show’s 55th-anniversary cast photo, which typically only shows permanent core cast members. O’Brien was a part of that long before her character was even announced. So, expect her to be a regular part of Salem.

Viewers are aware that Gwen despises Abigail, but she’s not the only target. Gwen is also determined to destroy Jack Deveraux (Matthew Ashford). Those are the two people that seem to be on Gwen’s mind the most. Head writer Ron Carlivati previously told Soap Opera Digest that we would get answers in December 2020, which is coming up pretty quickly.

Days Of Our Lives Spoilers – Gets Close To Jack Deveraux

Days of Our Lives spoilers reveal that in the future, Gwen could get close to Jack. This makes the theory that she is Jack’s daughter even more likely. In a cast photo posted on the soap’s official Instagram account, Gwen is besides, but also behind Jack. She has her arm around him, but not in a romantic way. It definitely suggested a family link, though.

At the Day of Days 2020 virtual event, O’Brien talked about getting ready and being in character. The actress admitted that she really can’t get in character until she is fully “Gwenified.” Meaning that her makeup is done, her hair is styled and she is in Gwen’s clothing.

Now, when she was speaking and was demonstrating being “Gwenified,” we only saw from her shoulders and up. However, she appeared to be wearing some sort of red fabric that crisscrossed around the neck. Now, the fabric wasn’t cotton or polyester. It was a fancier fabric, one that would be used for an elegant dress, a high-class party, or even a date with someone wealthy.

So, we are assuming that she has some pretty fancy scenes coming up and it’s leading us to speculate. It’s not like she’s dressed for a party as Abigail’s guest or nanny or event coordinator. It’s more like she’s the guest of honor and we are thinking it’s connected to the DiMeras, even after her secret comes out.