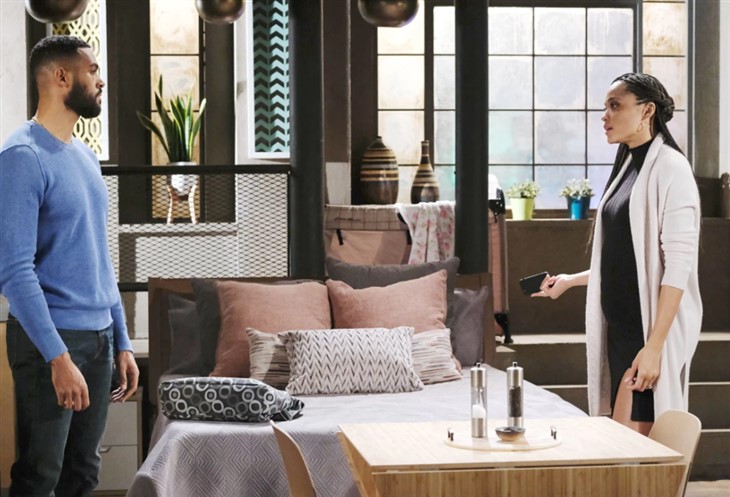 Days of Our Lives spoilers for the week of November 30 reveal that Lani Price Grant (Sal Stowers) will have a prenatal appointment. Despite Kristen DiMera’s (Stacy Hiaduk) advice, Lani will still want nothing to do with Eli Grant (Lamon Archey). However, he will crash her prenatal appointment and refuses to go away because the twins are his babies, too.

DOOL spoilers reveal that ever since Lani found out what Eli was hiding, she has been furious. She was so angry that she even kicked her husband out of the house. While it’s understandable that Lani doesn’t like being lied to or secrets kept from her, Eli only did what he did to protect her.

Lani went to visit Kristen DiMera (Stacy Haiduk) in prison and explained that she knew about her confession being coerced by Eli. She gave her BFF an update, including that she kicked him out. Kristen reacted by urging her friend to forgive Eli and understand his motivations for doing what he did. Lani claims that she does get it, but Kristen also wanted to be sure that her sacrifice wouldn’t be for nothing. Despite her words, it seems that Lani still hasn’t forgiven Eli.

Days of Our Lives spoilers for the week of November 30 reveal that Lani will go to her prenatal appointment. She doesn’t invite Eli to come along or meet her there. In fact, she probably doesn’t want him around her or the babies at all. This makes Eli crash the prenatal appointment and stick around despite him being ordered to leave.

In Eli’s mind, Lani can be mad at him and kick him out of the house. However, she is not going to keep the babies from him. He’s right about that… they are just as much babies as they are hers. He should be part of Lani’s prenatal appointments just like he should be present at the birth.

Do you think Lani Price Grant will ever forgive her husband? Can “Elani” be saved or has the detective ruined his marriage for good? We will have to keep watching the NBC soap opera to see how this storyline ends.