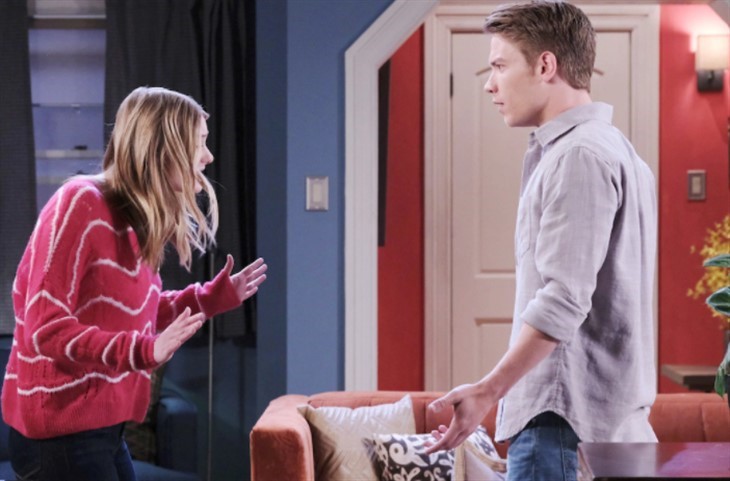 Days of Our Lives spoilers for the week of November 30 reveal that in Salem Allie Horton (Lindsay Arnold) points a gun at Tripp Dalton (Lucas Adams). We know he doesn’t die, but he could get shot. When the police question Tripp, could he prevent Allie from going to prison by saying he doesn’t know who shot him? If so, he might want something in return.

Days Of Our Lives Spoilers – Allie Horton Shoots And Runs?

DOOL spoilers reveal that Allie gets a gun and threatens to shoot Tripp, per the new issue of Soap Opera Digest. It isn’t known yet if she actually pulls the trigger or if Tripp can convince her not to risk going to prison. However, it is November sweeps and this is a big storyline. So, we are guessing that Allie will shoot the man she thinks raped her, but then go into a panic and run.

Since the gun belongs to Kate Roberts DiMera (Lauren Koslow), she will come under suspicion for shooting Tripp. So, when Tripp regains consciousness in the hospital, he will have to answer questions.

It is possible that Tripp will tell police that he doesn’t know who shot him, knowing that there will be no gunshot residue on Kate’s hands. She could also have an airtight alibi and nobody would even think of Allie getting revenge on her own. However, why would Tripp protect the woman who is accusing him of rape?

Days Of Our Lives Spoilers – Tripp Dalton Wants Something In Return

Days of Our Lives spoilers reveal that Tripp is sympathetic about Allie being raped. At the same time, he can’t keep going on worrying about going to prison. Even worse is the fact that everyone in Salem hates him, including his own stepmother. Could he make a deal with Allie and will she be desperate enough to agree?

If Tripp doesn’t identify Allie as the person who nearly killed him, then he will want something in return. Could he tell her not to talk to the police in London and stop trying to get justice? He could remind her that attempted murder will send her to prison for many, many years, and she would miss out on her son’s life. Would this be enough to convince her? It just might, but it still leaves this storyline unresolved. At some point, we have to find out who really raped Allie, why she thinks it was Tripp and what about those troubling DNA results?