Days of Our Lives (DOOL) spoilers tease that most of the time jump mysteries are set to come out in the next week or so. It’s seems as if Sarah Horton (Linsey Godfrey) and Kristen DiMera’s (Stacey Haiduk) babies may have been switched, although it hasn’t been shown thus far? But if that’s the case, how could such an awful mistake have occurred?

We already know that Mother’s Day was the day that Sarah and Kristen both gave birth. It was also the day that Adrienne Kiriakis (Judi Evans) and possible Haley Chin (Thia Meggia) died. We know that Haley was working as a nurse when Kristen’s baby was born. Could she have somehow switched the babies accidentally?

Days Of Our Lives Spoilers: Did Summer Townsend Drive Maggie To Drink And Cause Adrienne’s Death? https://t.co/Ycd2ql6YtJ pic.twitter.com/0Wo1xVecGs 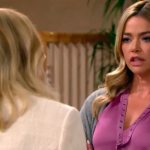 Days of Our Lives Spoilers: With so much going

Perhaps Haley was caring for the babies, putting them each in their respective beds. Maybe she was about to put the labels indicating which baby was which when Adrienne took a turn for the worse and she was called in the assist. With so many things happening all at once, it’s possible Hayley returned and got the labels mixed up. Or perhaps she noticed that the babies had the wrong names and was about to correct it when Adrienne showed up?

DOOL Spoilers: There doesn’t seem to be anyone else

No one has seemed to be acting strange regarding the babies, so it seems unlikely a switch was made purposefully. And if Hayley did realize the mistake, she didn’t have time to fix the problem because she died shortly thereafter. If so, she took that secret to her grave.

Did Hayley accidentally switch the babies? Did she realize her mistake, only to be killed before she could fix the situation? Only time will tell, so stay tuned to Days of Our Lives airing weekdays on NBC. And don’t forget to check back here regularly for all your Days of Our Lives news, information and spoilers!