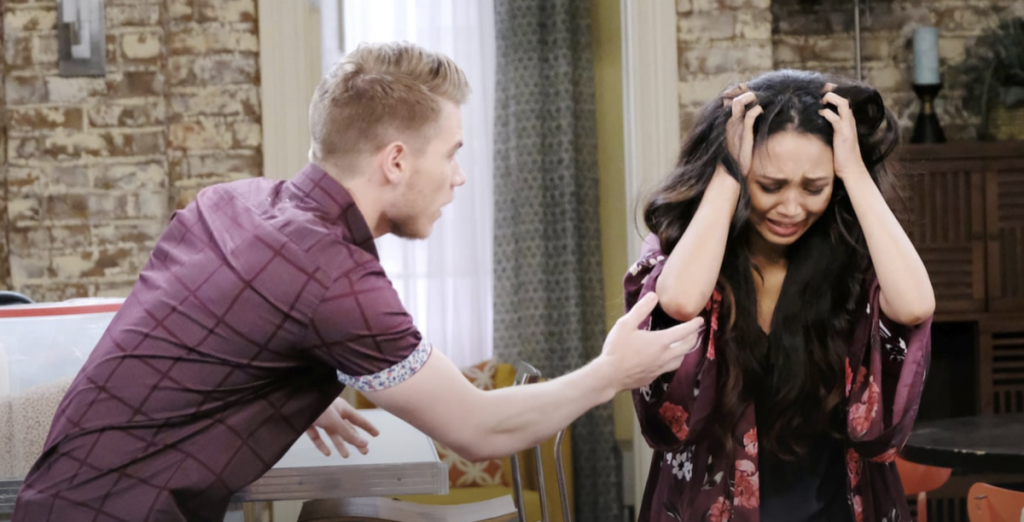 Days of Our Lives fans shouldn’t even wink or they might miss some of the action in this week’s DOOL weekly promo! Susan Banks (Stacy Haiduk) sees double and pulls a gun on her lookalike, Kristen DiMera masquerading as Susan, and Rex Brady (Kyle Lowder) attacks Xander Kiriakis (Paul Telfer) over Sarah Horton Brady (Linsey Godfrey) as she and Eric Brady (Greg Vaughan) look on!

The drama continues as Gabi Hernandez (Camila Banus) and Stefan DiMera (Brandon Barash) decide to get married, and Jack Deveraux (Matthew Ashford) tells Eve Deveraux (Kassie DePaiva) he wants a divorce, and she retaliates with an attack!

FakeNicole Walker (Adrienne Zucker) wants one of the DiMera twins, Andre and Tony (Thaao Penghlis) back in her life, and Brady Black (Eric Martsolf) assures her that they are both quite dead. (Brady shouldn’t be so sure of that!) Haley Chen (Thia Megia) has a horrible vision of Claire Brady (Olivia Rose Keegan) stabbing Tripp Dalton (Lucas Adams) fatally with a large knife to the back and he falls to the floor!

In Monday’s Days of Our Lives episode, Gabi has to give Stefan bad news, while Xander humbles Kristen and makes her grovel! Also on Monday, Susan sees double and Kate DiMera (Lauren Koslow) accidentally attacks Sarah!

On Tuesday, Ted Laurent (Gilles Marini) is questioned by Lani Price (Sal Stowers) when she notices inconsistencies in his statement regarding his kidnapping; Xander is fed up and splits with Kristen for good, ending their alliance. Also in Tuesday’s Days of Our Lives, Stefan tries to get Kate to bargain with him about changing her statement.

In Wednesday’s episode of Days of Our Lives, Xander and Rex fight over Sarah and Rex threaten Xander’s life; Jennifer Horton (Melissa Reeves) finally decides to move on from Jack and reaches out to Dr. Henry Shah (Andre Khabbazi) about going on a date with her. Also on Wednesday, Eve surprises Jack by supporting him taking the memory serum, and Haley starts having disturbing visions of Claire.

On Thursday, Jack surprises his son JJ Deveraux (Casey Moss), perhaps with telling him he’s decided to take the memory serum because he wants to get his memories back; and FakeNicole shares her plans for DiMera with Brady. Also in Thursday’s episode, Stefan and Gabi brainstorm to come up with a strategy against Nicole, and Eve takes drastic measures to prevent Jack from regaining his memories.

Friday, Tripp, who has suffered from post-traumatic stress disorder, or PTSD, in the past himself, tries to help Haley, who is exhibiting the symptoms. FakeNicole seeks another ally, Xander having cut ties with her, and seeks out someone from the past. Also on Friday, Jack sees Eve committing an act of betrayal against him!