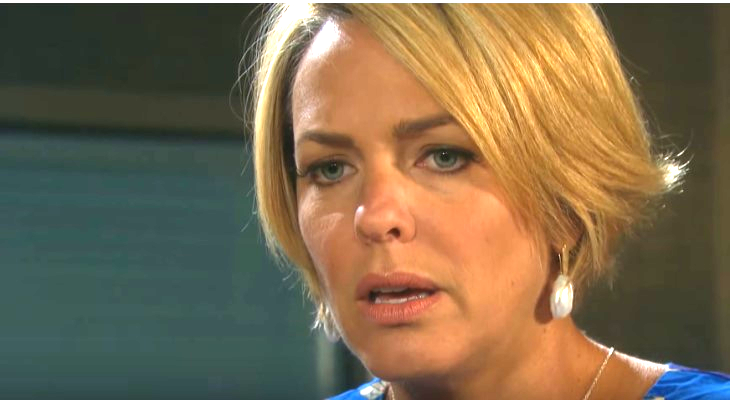 Days of Our Lives spoilers reveal that Nicole Walker (Arianne Zucker) thinks she should be the judge of who gets Mackenzie “Mickey’ Horton (the May twins). How quickly she forgets her own past and people’s concern about her own ability to be a mother. When she tells Eric Brady (Greg Vaughan) to keep the baby switch a secret, should he dump her for even suggesting it?

Days of Our Lives Spoilers – Delivering A Truth Bomb

DOOL spoilers reveal that on Monday, Nicole returned to Salem and walked in on Eric as he was getting ready to fly to New York to track her down. After confronting her about lying to him, Nicole found the strength to tell him the painful truth about Mickey.

At first, Eric didn’t believe it and tried to wrap his head around how it could possibly be. However, he eventually had to accept that he was not Mickey’s father.

Nicole made a horrible suggestion and one that proves she hasn’t “totally” changed for the better. She told Eric that they could keep the truth about Mickey’s biological parents a secret. While it’s understandable why she hates Kristen DiMera (Stacy Haiduk) so much, nobody deserves to think that their baby is dead while it’s being raised by someone else.

Thankfully, Eric will decide that they have to tell the truth to Kristen and Brady Black (Eric Martsolf). After all, you can’t keep that kind of secret from Brady, who did nothing to deserve this. Plus, Brady and Eric are brothers and everyone knows that secrets don’t stay secret forever in Salem.

Days of Our Our Lives Spoilers – Forgetting Her Own Checkered Past

Days of Our Lives spoilers reveal that Nicole has changed for the better in the past few years. However, she is far from perfect and is not a saint. She also has no right to tell people who should parent Mickey and who should not.

Who made her judge and jury? What gives her the belief that she can play God with people’s lives? It doesn’t make her any better than Xander Cook Kiriakis (Paul Telfer).

The whole reason for his baby swap actions was to protect Sarah Horton (Linsey Godfrey), much like Nicole wants to protect Eric. However, Nicole is quick to slam Xander while her doing the same thing is okay?

Eric always wants to do the right thing and tries his best to live by a moral code. He should be horrified that Nicole even suggested that they keep the truth from Mickey’s real parents. He keeps telling her how much she’s changed and she’s a good person now, that they promised no more secrets and lies. Is Nicole on her way back to her old ways? Should Eric wonder what else Nicole would keep quiet about and dump her?

General Hospital Spoilers: Dev Has been Out Of The Picture on GH – Where Is Ashton Arbab?