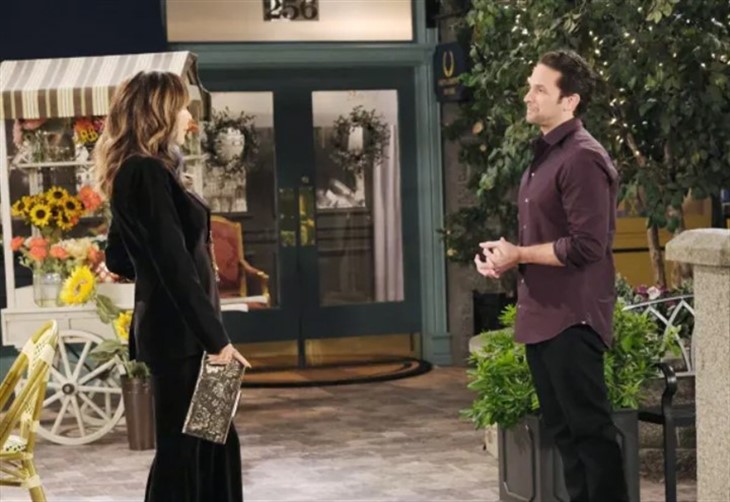 Days of Our Lives spoilers tease that in Salem Kate Roberts (Lauren Koslow) and Jake Lambert (Brandon Barash) will soon give in to their passions in an upcoming episode of Days of Our Lives!

Kate is old enough to be Jake’s mother – at least. He is at least ten years younger than her youngest child! However, Jake is flirting big time with Kate – and pressed for a date to Jack and Jennifer Deveraux’s (Matthew Ashford, Cady McClain) anniversary party, she decides to take him as her plus one at the last minute. Kate has more than “aged well” and is still a very attractive woman, even though she is sixty-seven years old!

Jake is only forty-five, meaning there is a twenty-two-year gap between the two of them! Chad DiMera (Billy Flynn) put the idea in her head that she needs a man in her life again since she hadn’t been with anyone since Victor DiMera (Thaao Penghlis) died. At first, she declined, until Chad teasingly told her all she had to do was sit in the corner, sip martinis, and voice snide remarks!

But the idea of a date with an attractive man keeps swirling around in her head, and Jake has been flirting with her hard! When she runs into him in Horton Town Square, she is flattered when he whistles at her – and decides to ask him to come to the party as her “plus one”. That means he’s a date but not necessarily a boyfriend or a lover – yet!

Kate thinks Jake is – kinda cute! She always has kind of a penchant for bad boys, and even though Jake doesn’t appear to be the worst kind of DiMera bad boy bad, he’s pretty easy on the eyes. He’s a little rough around the edges, but he’s got ambition – like Kate herself! Jake wants his piece of the DiMera pie, and wants part of Stefano DiMera’s (Joseph Mascolo) legacy!

Days of Our Lives viewers will recall that Kate once was in the running for DiMera’s head honcho, against Gabi Hernandez (Camila Banus) after Jake’s twin Stefan DiMera (Brandon Barash) died. She qualified as Victor’s widow but didn’t get the job.

Kate has just kind of been floating around ever since, although once Dr. Wilhelm Rolf (William Utay) brought her back to life after Stefan and Jake’s mother Vivian Alamain (then played by Robin Strasser) shot her and buried her in a freshly dug grave!

Kate should probably think twice about getting serious with Jake, Vivian isn’t really dead! She certainly wouldn’t want her as a mother in law! Jake’s flirting has been really giving Kate an ego boost, and the more she’s around him the more she’s attracted to him – and vice versa! It won’t be long before they give in to their passions after coming home from the party!