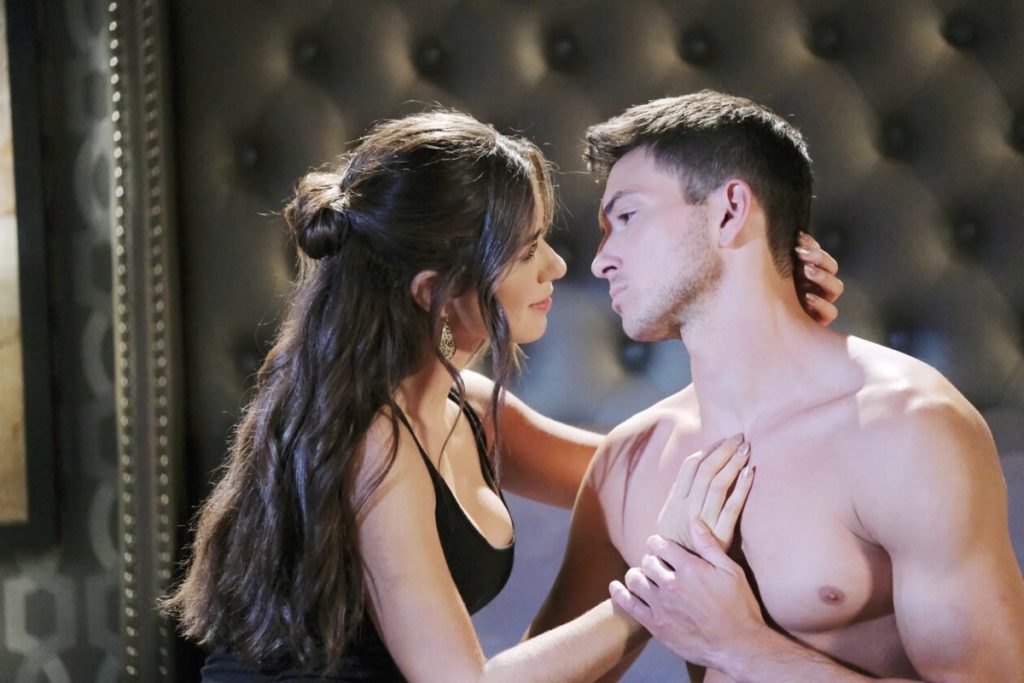 Days of Our Lives spoilers tease that Ciara Brady (Victoria Konefal) and Ben Weston (Robert Scott Wilson) will be celebrating his new job in an upcoming episode of Days of Our Lives!

DOOL Spoilers: Ben Weston Applied For A Job At An Automotive Repair Shop

Days of Our Lives viewers will recall from Friday’s episode that Ben went and applied for a job at an automotive repair shop, after Ciara Brady’s (Victoria Konefal) motorcycle broke down and Ben diagnosed a carburetor problem. Ciara was impressed enough to recommend him to go answer an ad she had found for a mechanic. Ben has no formal training, but he is definitely mechanically inclined, so he decides to give it a try.

Days of Our Lives Spoilers: Kayla Has News For Steve – But Both Share A Tender Moment

He goes to the shop and applies for the job, being amazed at how much the shop owner, Jake Lambert (Brandon Barash) looks like his former boss and friend, the late Stefan DiMera (Brandon Barash)! Ironically, Stefan had been the only one willing to give the former “Necktie Killer” a chance and he became his head of security; and now his doppelgänger, Jake, has hired him in spite of his having no formal training and a criminal record! This is definitely something to celebrate!

Now, Ciara needs to get a job and they will be where they want to be financially! Jake said Ben can start the next day. He expects him to sometimes have to work overtime and usually on Saturdays, although they will be closed on Sundays – Ben is just happy that someone hired him and he has a job, and mechanics’ pay isn’t too shabby, either! They aren’t on the street, but Ben and Ciara don’t want to live off the kindness of friends and relatives either, let alone the kindness of strangers!

Days of Our Lives Spoilers: Such A Strange Coincidence

It is such a strange coincidence that the two men in Salem who have ever believed in Ben enough to give him a job without caring about his criminal record look like identical twins! As Ciara and Ben celebrate over a dinner at the nicest restaurant in town, figuring it will be okay to splurge, Ben tells Ciara that he talked to Jake about Stefan and how he grew up in an orphanage but Jake said as far as he knows he wasn’t adopted nor did he have a twin. Ciara hopes that all of Stefan’s old enemies know that he’s already dead!

The two of them wonder if Gabi Hernandez DiMera (Camila Banus) has seen him and what she thinks – they can only imagine! Jake said Ben looked like he’d seen a ghost, but the two men couldn’t be any different. Stefan wore suits and business wear and Jake wears mechanics’ overalls. Stefan commanded a corporation and its employees and Jake “commands” repairs on cars, and is hands-on and not afraid to pitch in with the guys on the garage floor – in fact, he was under a car on a mechanics’ creeper (like a giant skateboard or flat dolly) when Ben came to apply for the job!

They both are glad there is no more “Steveano” DiMera (Stephen Nichols) so Jake won’t be bothered by Stefan’s father – they can see where even The Phoenix might be mystified by the one son he never met having a doppelgänger that he didn’t create or have anything to do with!

The Royal Family Has Secret Nicknames – What You Need To Know!

The Bold and The Beautiful Spoilers: What Did Wyatt See, Fooled By Sally Or Ready To Dump Her?