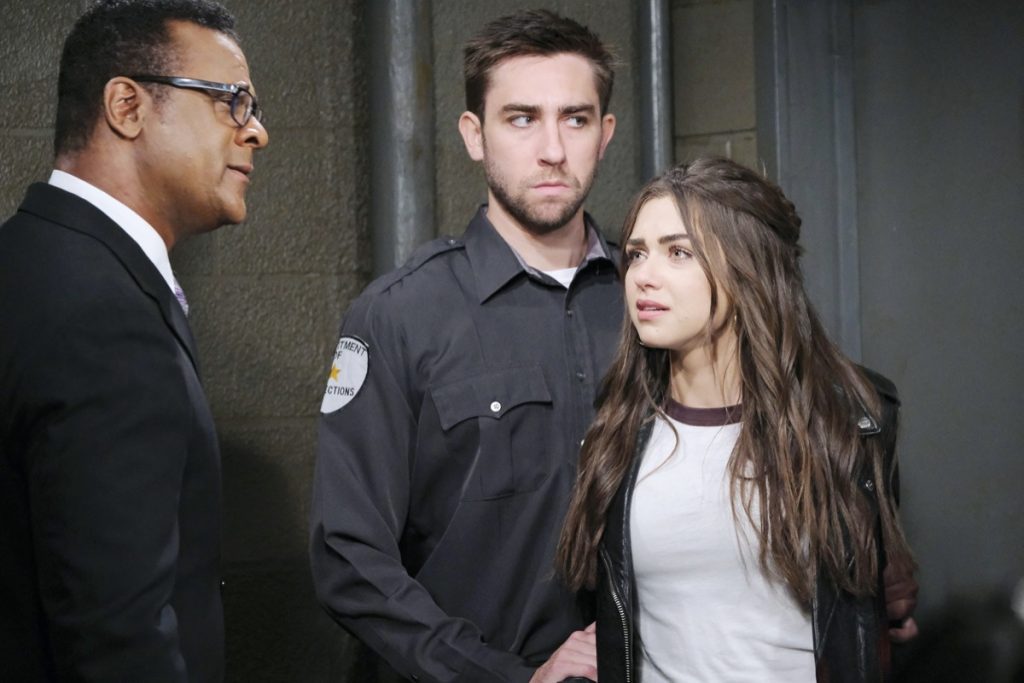 Days of Our Lives spoilers tease that Ciara Brady (Victoria Konefal) will make a last ditch effort to stop Ben Weston’s (Robert Scott Wilson) execution in an upcoming episode of Days of Our Lives!

Ben is facing death by lethal injection as he sits in the execution chair and is strapped in. Dr. Marlena Evans (Deidre Hall) and Will Horton (Chandler Massey) are there for support, but he doesn’t see Ciara – maybe it’s because she’s still working on getting the proof of David Ridgeway’s (Kyler and Caleb Ends) real killer. Marlena tells him she’s there for him, and she knows she has changed.

He doesn’t realize that Ciara has come to tell the warden about the new evidence and the warden is in the process of blowing her off, just thinking it’s another stunt. Police Commissioner Rafe Hernandez (Galen Gering) would probably be right by her side but he’s busy looking for David, who “Evan Frears” aka Christian Maddox (Brock Kelly) has kidnapped! Meanwhile, he is at the Kiriakis mansion holding a gun on Sonny Kiriakis (Freddie Smith) but sans David!

Days Of Our Lives Spoilers: Ben Weston Realizes This Is Probably It

Ben realizes this is probably it – he’s out of appeals, he’s strapped in the chair, and minutes away from getting the first of the three lethal injections. The executioner explains the process and that first his arms and legs will feel very heavy and then his heart will fail. Ben starts to think karma has come back to bite him for all the things he had done in the past when under the influence of mental illness and not being treated for it.

In spite of his innocence for the murder of his sister, Jordan Ridgeway (Chrishell Stause) he feels like now he’s being punished for someone else’s crime and will die for it because of his past crimes. It is definitely a scary time for Ben.

The warden doesn’t believe anything that Ciara says, and thinks of all her efforts to free Ben as a stunt. He probably tells her she’s wasting her time trying to find another killer because for one thing, the execution is too late to stop and the world is better off without the necktie killer!

The warden says he should have been executed long ago instead of being put in Bayview for treatment – the warden doesn’t believe any criminal can ever change or that any of their crimes could be due to mental illness – he says if it looks like a duck, walks like a duck and swims like a duck, it’s a duck, no other explanation! Ciara cries and panics, and looks in the window of the execution center and starts to cry – Marlena stays behind to support Ben and Will and Ciara talk and she updates him on the new information. From that point, they will join forces to save Ben!

The Young and the Restless Spoilers: Nick Tells Phyllis There’s No Future For Them