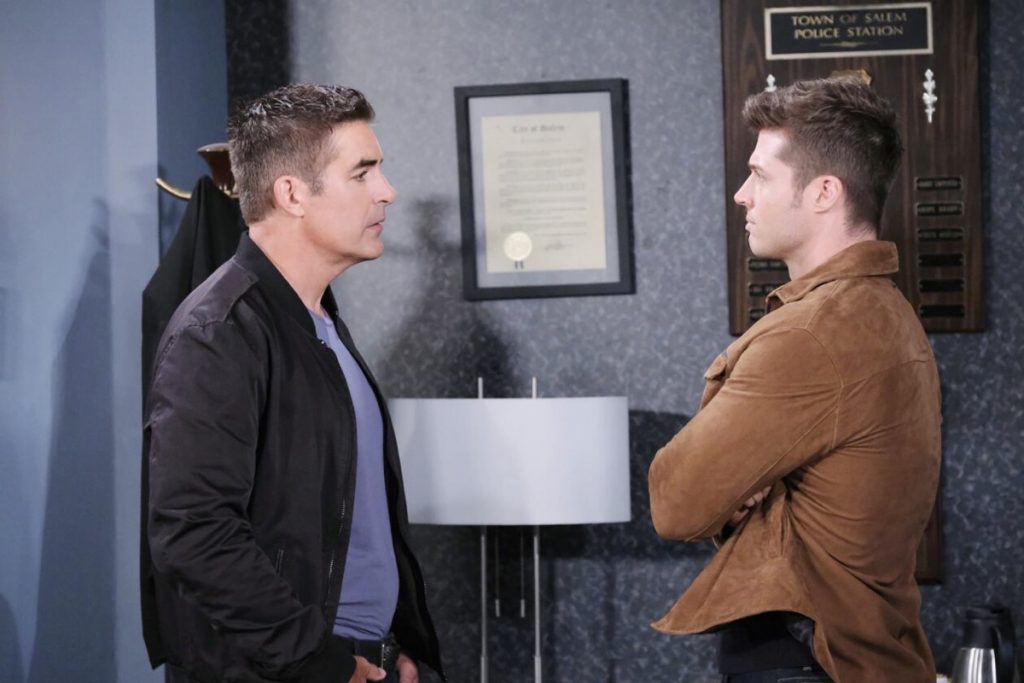 Rafe Hernandez (Galen Gering) confronts Evan Frears (Brock Kelly) about his deceit. Days of Our Lives viewers will recall in Thursday’s episode that Rafe asked Evan about the paperwork from the adoption agency and that they had told him they’d sent it twice.

Evan, of course, had thrown it away but lied that he didn’t know anything about it. Rafe said he’s checking back with the adoption agency if he didn’t hear back from them soon. He then went into work and called them right away.

Ciara Brady, (Victoria Konefal) who stayed behind at the Salem PD after Rafe left to go home, answers Rafe’s phone after he told her he would call his contact at the FBI and tell her he authorized Ciara to be told any information that she found.

The contact found David Ridgeway’s (Caleb and Kyler Ends) DNA in the system along with an alias and a criminal record; she talked to Ben on the phone and updated him, and told him that David’s father’s name is Christian Maddox! She hopes she can get the information to the prison board in time to stop the execution! She has to prove he was in Salem too, but that shouldn’t be too hard to do when she and Rafe put what they found out together!

Stefano DiMera (Stephen Nichols) has come back to Justin Kiriakis (Wally Kurth) and Kayla Brady’s (Mary Beth Evans) condo and now that Justin got the ten million dollars ransom for Kayla, he wants even more! He wants Justin to deliver his “queen of the night” Marlena Evans (Deidre Hall) to him in addition to the ten million dollars he needs to make his getaway!

He told Justin he couldn’t access his money as Steve Johnson – you mean to say the great Phoenix doesn’t know about online bank accounts and transfers? He probably just doesn’t want anything traceable and that’s why he wanted the ten million dollars cash!

Days of Our Lives Spoilers: Will Surprises Sonny – What’s In Store For Their Future? https://t.co/v2bLi1j6Zu pic.twitter.com/7gPp7y2U4R

With his execution only hours away, Ben Weston says goodbye to his father, Clyde Weston (James Read). He has never been a good father to Ben but he wants to say goodbye to him anyway; Clyde never will understand why Ben turned himself in at the SPD but then Clyde will never understand what real love is, either!