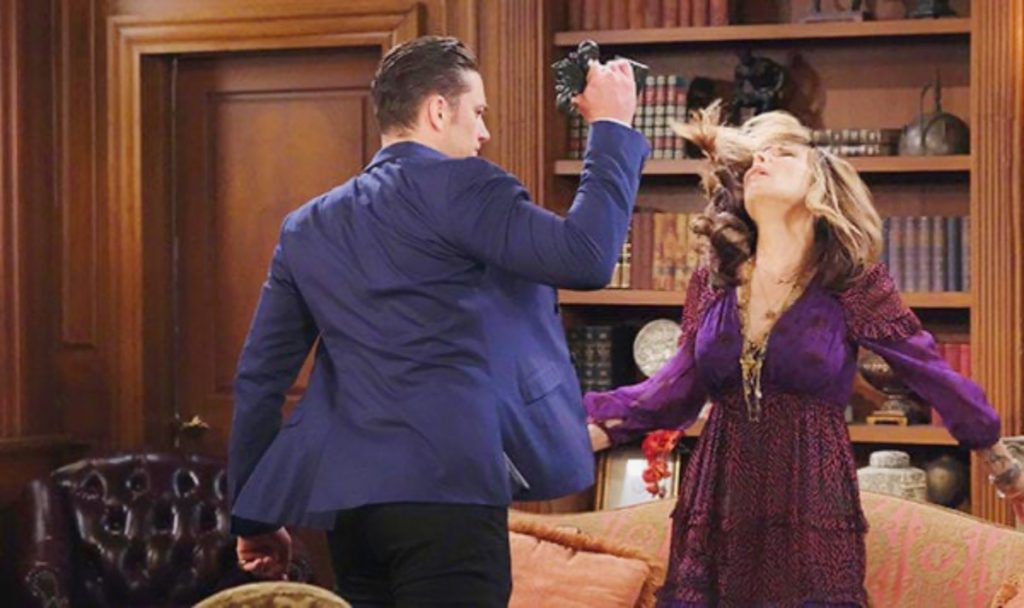 Days of Our Lives spoilers tease that Chad DiMera (Billy Flynn) will attack Kate DiMera (Lauren Koslow) and Gabi Hernandez DiMera (Camila Banus) together in an upcoming episode of Days of Our Lives!

As Days of Our Lives, viewers will recall, Chad DiMera has been drugged by his father, Stefano DIMera (Stephen Nichols) and brainwashed into being his father’s assassin.

He has tried to attack both Gabi and Kate in recent weeks, at the orders of Stefano, but failed to complete the job. Now he must complete the mission; Gabi is an unwelcome hindrance to Stefano, and his “Katerina” has outlived her usefulness to him, so they must both be eliminated, and Chad knows what he has to do! The first thing he will need to do is make sure the two are together and sufficiently distracted, most preferably by each other, so that he can attack and take care of both of them at once!

He plans to stab them with a sharp letter opener, but perhaps he should choose a better, more deadly weapon – like a gun! A gun with a silencer would be best, and in an area where blood would be the easiest to clean up after the assassinations are completed.

Days of Our Lives viewers will recall that he had previously tried to smother Gabi with a pillow in Salem University Hospital, only to be interrupted by her brother, Rafe Hernandez (Galen Gering) and tried to stab Kate with a letter opener and again was unsuccessful. This time Chad must succeed; he must not disappoint his father! This is a very important assignment!

Even though Gabi herself is a formidable foe with ten sharp nails all the better to claw out his eyes with, and Kate is a handful herself, Chad thinks if he plans it exactly right he can kill two birds with one stone – or letter opener, or gun. The first thing he has to do is trap them and make sure the room is secured where neither can try to run or to call for help while he is attempting to complete his father’s mission and carry out his orders. He plots and plans the weapon he will use the method of distraction and the method of gathering the two in the same room.

He makes sure the room cannot be escaped from and that there are not usable phones with which to contact anyone. He even distracts each of the two women in order to remove their cell phones from their purses and putting them in a lockbox where neither one has access. Perhaps he should offer them a drink with an extra ingredient that will knock them out, that way it would be easier.

Then they cannot scream, they cannot run, they cannot fight, and they cannot gang up on him to try to take him down! Finally, Chad has both Gabi and Kate right where he wants them and he prepares to complete the kill!