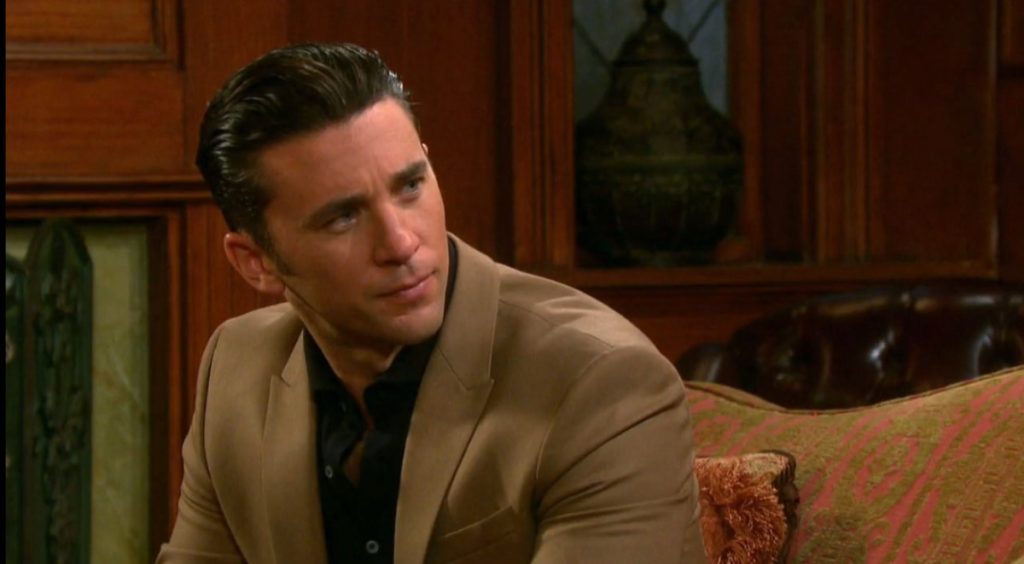 Days of Our Lives spoilers tease that Chad DiMera (Billy Flynn) will soon receive orders to kill Kate Roberts (Lauren Koslow) in an upcoming episode of Days of Our Lives!

Stefano DiMera (Stephen Nichols) has brainwashed his son to become his assassin, first spiking his drinks for several days with a substance that obviously makes him susceptible to post-hypnotic suggestions, although there were no scenes played out on screen to suggest he was hypnotized; however, he hears his father’s voice giving him commands when he puts his father’s ring on his finger.

Longtime Days of Our Lives viewers will recall that Chad was brainwashed once before, by Andre DiMera (Thaao Penghlis), and the trigger word was “La Famiglia” which Stefano has also been heard saying this time around. When Chad was brainwashed by Andre, however, a contraption where he sat in a chair with a headpiece was used to program his brain; the method used by Stefano this time is much different and seems to be tied to the substance he spiked Chad’s drinks with and the ring.

Days of Our Lives viewers will recall that Chad’s first assassination order from Stefano is to kill Gabi Hernandez DiMera (Camila Banus) because she is a competition for DiMera Enterprises, and Stefano considers her a rival, even though Chad has gotten her fired.

He went to her hospital room, where she was recovering from donating bone marrow to baby Mackenzie “Mickey” Horton (Josephine and Rosalind May) and started to try to smother her with the pillow, but then was interrupted by her big brother, and Salem Police Commissioner Rafe Hernandez (Galen Gering) coming for a visit. Chad managed to quickly explain what he was doing with the pillow, just plumping it up to make her more comfortable despite his and Gabi’s history of antagonism towards each other. When he returns to the DiMera mansion, if he takes off his ring, he may not even remember what happened!

Days Of Our Lives Spoilers: Kristen Feels A Strong Pull Toward Baby Mickeyhttps://t.co/Zyf2blEiTC

Stefano’s “Katerina”, Kate Roberts (Lauren Koslow) has outlived her usefulness to him and so she is the next victim he gives and order to Chad to kill. There will be no interruptions this time, more than likely, because Kate has moved back into the DiMera mansion. Chad had told her it was okay for her to move back into the room she once lived in.

Abigail DiMera (Kate Mansi) is still in Africa helping her brother JJ Deveraux (Casey Moss) get settled, and the children are with Jack and Jennifer Deveraux (Matthew Ashford, Melissa Reeves) so there should be no hindrances or interruptions this time to prevent Chad from carrying out his father’s assassination orders. Kate won’t even realize that her life is in danger! However, she already suspects there might be something Stefano-related going on with Chad because he just doesn’t seem like himself!