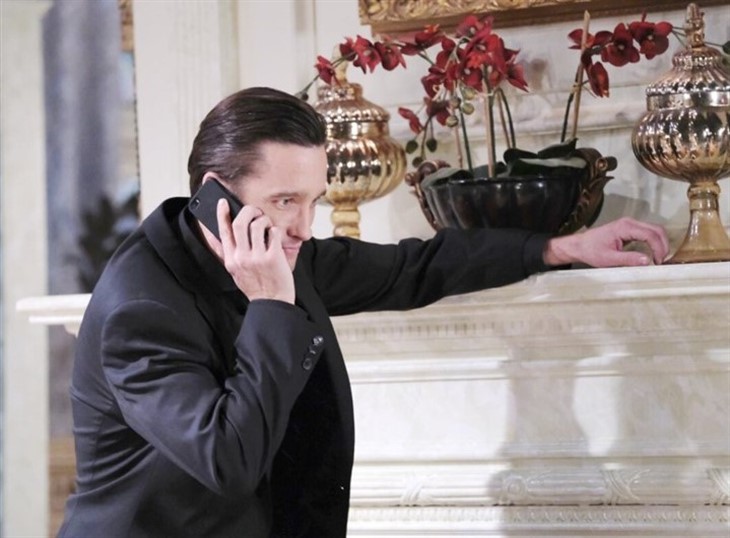 NBC Days of Our Lives (DOOL) spoilers for next week of October 19 reveal that Philip Kiriakis (Jay Kenneth Johnson) gets caught red-handed conspiring against Xander Cook Kiriakis (Paul Telfer). Brady Black (Eric Martsolf) confronts Philip about his scheme. Then, Brady is forced to pick aside. Will he partner with Philip, who makes all kinds of promises? Or will he put a stop to the madness?

DOOL spoilers reveal that Philip is up to something. We know he came back to Salem not to reconnect with his family, not to make amends with his father and not because he truly wanted to help run Titan. He’s angry, bitter, and vengeful, but his scheme might be more complicated than we originally thought. He is partnering with a mystery person, but we aren’t exactly sure what his end game is yet.

Is it to completely take Titan away from Victor Kiriakis (John Aniston)? Is it to ruin the company as a way to get revenge on his father? Or could this be all about Xander going from an outcast to Victor’s sidekick and confidante?

In two weeks, Philip will be conspiring against Xander and gets caught red-handed. Brady immediately confronts him about overhearing his conversation. Now, Brady has never been a fan of Xander’s, but the scheme must be pretty evil for him to get in Philip’s face about it.

Around this same time, Belle Black (Martha Madison) will start to get a bad feeling about Philip, so she considers dropping his legal case. Then, she ends up hearing a scandalous discussion that confirms her worst fears.

Days of Our Lives spoilers reveal that when Brady confronts and grills Philip, he may unashamedly admit to what he is doing. However, he could try to get Brady on his side and promise him certain rewards by helping him. The other possibility is that Philip will use the things that Victor and Xander have done to him as a way to get him to agree. Even though the two have done a lot of terrible things to Brady, he has grown since then.

DOOL Spoilers – Teaching Him a Lesson

It is possible that Brady will accept Philip’s offer, but will just be playing him. He very well could give Philip a dose of his own medicine by working against the person he agreed to partner with.

That certainly sounds like something Brady would do, but could there be consequences in the end? We will have to keep watching the NBC soap opera to find out how this story ends.