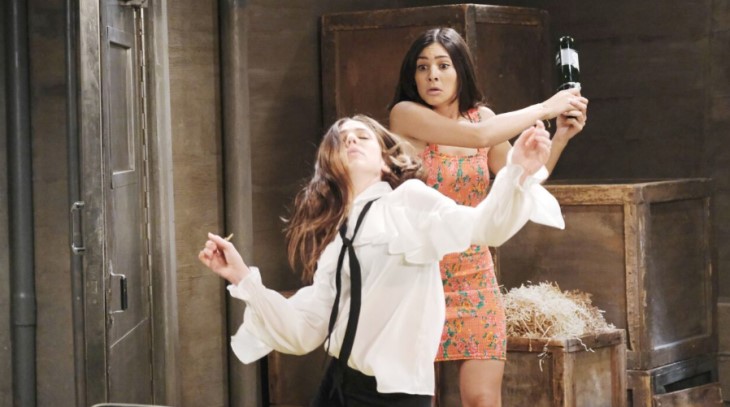 Days of Our Lives spoilers tease that Abigail DiMera (Kate Mansi) will make a shocking discovery in an upcoming episode of Days of Our Lives; will she find Kate Roberts (Lauren Koslow) and Gabi Hernandez (Camila Banus) locked in the secret room at the DiMera mansion?

Days of Our Lives viewers will recall that Chad DiMera, (Billy Flynn) had knocked Kate and Gabi out with a heavy bookend, and before he could either finish them off or hide them, Abby had unexpectedly come home to surprise him! Chad has been brainwashed by his father, Stefano DiMera (Stephen Nichols) to do his bidding, although he doesn’t appear to be as totally brainwashed as Stefano would have liked.

Chad is not a robot, he still has the ability to choose his actions and act according to what he thinks is the best way to proceed in a given situation. In this case, he had to stash an unconscious Gabi and Kate in the secret room that Stefan DiMera (Brandon Barash) had used as a wine cellar which was in the tunnel that goes outside into the garden and opens behind a panel in the living room.

Abby returned to the room and found Chad by the panel and wanted to know why he had been in the tunnels. He told her he was looking for his father, and Abby doubted that Stefano would come through the tunnel again. Chad then said he was checking for rats because there had been rats in the tunnels. She freaked out and told him to seal the tunnels, and he told her she was overreacting.

But then she noticed he had the Phoenix ring on, and she didn’t understand why he would wear it – it’s like he had been marked by his father. He said he was just trying to keep his family together in the same way that she had kept her father, Jack Deveraux’s (Matthew Ashford) book when he was presumed dead.

Abby is still suspicious – she said Stefano had kidnapped Kayla Brady (Mary Beth Evans) and Marlena Evans (Deidre Hall) and she saw him as a threat. He changed the subject and she was tired but wanted some romance in bed and he was hesitant. Then she became very suspicious because that was not like Chad, especially after she had been gone for an extended period of time!

Days of Our Lives Spoilers – This Is Abigail DiMera’s Que To Start Snooping – Something Is Off With Chad DiMera!

All this together is Abigail’s cue that something is very off with her husband, and she needs to start snooping! Her mind goes back to the teasing about if he’s stashing tramps in the house and his response had been that he actually had stashed two tramps!

Then he talked about rats in the tunnels as a reason he had been in the tunnels, and even though she is not wild about the possibility of encountering rats, she will likely determine to get to the bottom of Chad’s strange behavior and the first thing she will need to do is find out why he was in the tunnels, and that will require her going into the tunnels to see what he might have going on in there!

She knows about the secret room and that is the first place she plans to look since she might find anything in there. And she does – Kate and Gabi! Kate tells Abigail that Chad has been brainwashed by his father, but will they be able to get out of there before Chad or Stefano finds them and does something worse? Time will tell!

General Hospital News: Leslie Charleston Opens Up About Having A Favorite Castmate