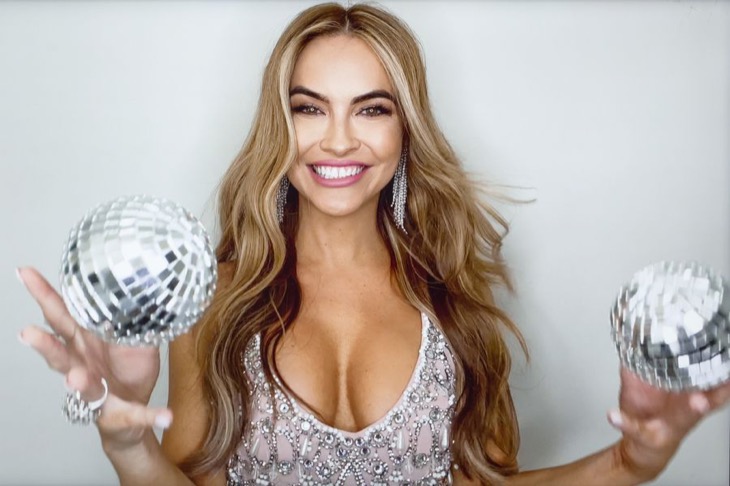 ABC Dancing With The Stars contestant Chrishell Stause is wasting no time making the most of her star turn on the dance floor. The Selling Sunset star is one of the celebrity dancers and on Wednesday she showed up to practice looking delighted and delightful.

Stause was pretty in pink as she strode up to the studio looking fit and fine in a cute salmon-colored dress and a Pedi to match.

Prior to her appearance on DWTS Stause carved out a niche in daytime. She appeared on Days of our Lives as Jordan Ridgeway and as Amanda Dillon on All My Children.

Stause had a white COVID mask in her hand as she walked to the studio, with a full bag casually slung across her shoulder. The mask is a requirement in California due to state coronavirus protocol guidelines.

Later in the day pictures captured Stause leaving the DWTS studio is decidedly less formal attire. She had on a snug, white crop top with a pair of yoga pants and tennis shoes.

With her perky smile and jaunty walk, it appeared as she had not a care in the world. And why should she? She is starring on the breakout hit Selling Sunset and the worst of her messy divorce from This Is Us star Justin Hartley looks to be over.

DWTS debuts next week with plenty of changes to its signature look and feel. Ahead of the show’s debut plenty of details have come out about the changes fans can expect.

For starters, pro dancer Derek Hough is back to the show. He was featured on DWTS from 2007 to 2016, and he holds the record for the number of Mirrorball trophy wins, having taken the top prize six times.

Dancing With the Stars Season 29: Production Update, Plus Will It Air in 2020? https://t.co/wv6Npd0Jdr pic.twitter.com/gxSkdEEuCj

This year Hough will not be dancing, he will be joining the judge’s table taking the place of longtime judge Len Goodman. While away from DWTS Hough kept busy as a judge on NBC’s World of Dance with Jennifer Lopez and Ne-Yo.

Carrie Ann Inaba and Bruno Tomoli will return to as judges but hosts Erin Andrews and Tom Bergeron are out. In their place will be Tyra Banks.

Season 29 of Dancing With The Stars premieres September 14 on ABC. A special two-hour episode kickstarts the season off right!