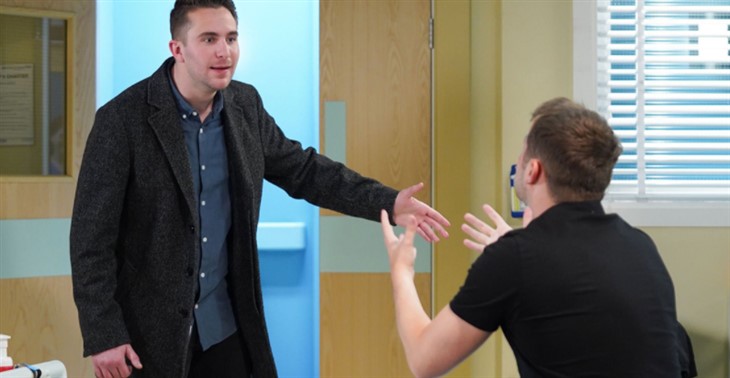 BBC Eastenders spoilers reveal that Ben Mitchell (Max Bowden) was caught on camera at the warehouse job. Callum Highway (Tony Clay) is already conflicted about what to do. Then, he is questioned about his connection to the Mitchell family. Could his love for Ben ruin his career before it even gets started? Or will Callum end up sacrificing his relationship?

“Ballum” is a fan-favorite soap couple, but they are two completely different people. Ben follows his family’s shady path, which has already gotten him into trouble. This was a serious concern of Callum’s because he wanted a career in law enforcement. It seems that the couple going down opposite paths will cause a conflict sooner rather than later.

Callum is ordered by his superior to go over the video footage from the warehouse. As he looks at the screen, he spots a possible suspect. Upon closer inspection, he realizes that the suspect caught on tape is none other than the man he loves.

Eastenders spoilers reveal that Ben is going to put Callum in a tough position. Callum took an oath to uphold the law and he can’t really keep his discovery from everyone else at the precinct. On the other hand, he would be betraying Ben by turning him in.

During the week of September 14, Callum will be forced to make a split-second decision regarding Ben’s criminal activities. He ends up being questioned about his connection to the Michell family. Callum will likely face consequences no matter how he responds to the inquiry.

Future Of ‘Ballum’ At Risk

If Callum pretends that he didn’t see anyone on the CCTV footage, what happens next time? Ben could make all the promises in the world, but he will do more jobs. At some point, his luck will run out. Keeping Callum in the dark won’t protect him, either. The relationship alone makes Callum guilty by association. His character, career, and even his freedom could be at stake.

What will Callum do when he is questioned about the Mitchells? Can he protect both his career and relationship? Or will be forced to make the most difficult decision of his life? We will have to keep watching the soap to see how this storyline develops.