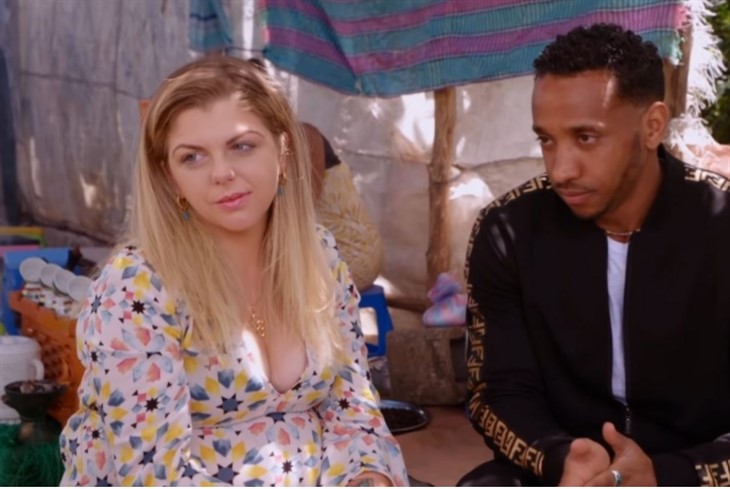 TLC’s “90 Day Fiancé-The Other Way” star Ariela Weinberg is blindsided in the next episode, “The Parent Trap” when she is made aware of an unexpected stumbling block on her way to marriage to Biniyam Shibre, her Ethiopian fiancé!

It is obvious to viewers that Ariela and Biniyam may not have discussed their religions and the differences between them. Biniyam, even though on the surface appears not to be all that religious, apparently the baptism of his baby with Ariela is quite important to him. Biniyam affiliated with one of the Christian churches in Ethiopia, while Ariela and her family are Jewish.

Viewers may have noticed she wears a necklace with the Star of David on it. While the preview of this episode does not show which of the Ethiopian Christian denominations the church they are in belongs to, there is even one denomination – the Orthodox Tewahedo – which claims to house the Ark of the Covenant, one of the holiest relics of Judaism in a small church in Aksum.

According to the Old Testament in the Christian Bible, the Ark of the Covenant, which was said to house the very essence of God, disappeared after Solomon’s temple was destroyed in 587 BCE.

If Ariela did know that Biniyam was affiliated with a Christian denomination and knew of the story of the Lost Ark of the Covenant being in this small Ethiopian church in Aksum, she may not have realized there would be that much difference in religion between the two of them and that it could be a divisive factor – on the other hand, it’s possible that the two of them may not have discussed their religions or their religious differences at all up until the filming of this particular episode.

In the preview, Ariela sits on a church pew in earshot of, but not seated with, Biniyam and a priest in an Ethiopian Christian church. She is veiled and dressed in a fashion reminiscent of Middle Eastern women, although her face is not covered as in some Islamic sects. Her head covering is definitely a veil, as opposed to a hijab. With having to veil herself it would seem that the church is of a more orthodox variety than a modern one.

Plus, the Orthodox Church is the largest in the country of Ethiopia. The priest wears white, a type of turban on his head and he and Biniyam discuss the baptism of their baby and possibly a marriage ceremony, although that is not discussed in the preview. They are seated on white folding chairs. Biniyam is obviously discussing the baptism of their baby, which at that time was not yet born, although from looking at Ariela, it was getting closer and closer.

They talk in Ethiopian, and although Ariela cannot understand everything they are saying to one another, she looks on in interest as she watches from a short distance away. Then Biniyam translates what the priest has told him in English, and Ariela is blindsided as she looks up in shock and says, “WHAT?!” It turns out that in order for the baby to be baptized, the mother must be baptized too, which will entail her conversion from Judaism to Christianity!

This should be interesting, not to mention dramatic! Stay tuned to “90 Day Fiancé-The Other Way” on TLC and check back here frequently for all the latest news, developments, and gossip about all your fave “90 Day Fiancé” shows and stars!

The Young And The Restless Spoilers: Vickie Makes Billy An Offer – Villy Focuses On Common Enemy