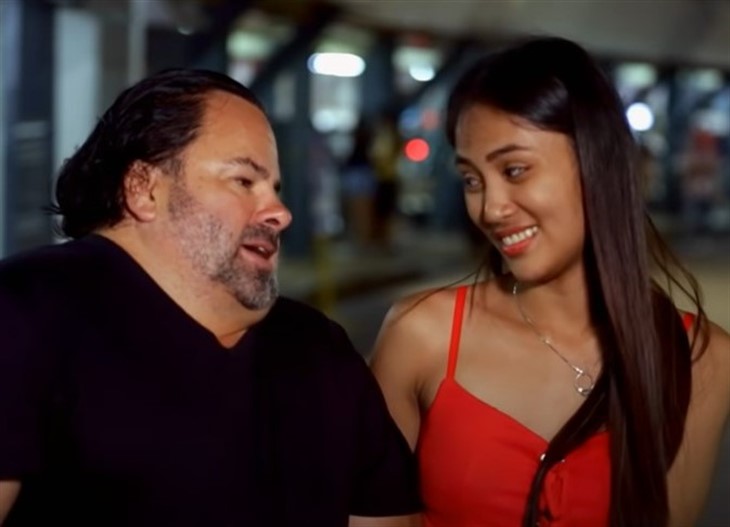 TLC’s “90 Day Fiancé-Before The 90 Days” star Big Ed Brown has been recently spotted filming something with Rosemarie Vega – could they be back together?

Big Ed and Rosemarie didn’t last long. They were a total mismatch and didn’t even make it through their one season on the show before breaking up. They looked like they could hardly stand to be on a video call together in the tell-all! But recently they have been seen filming – together! What is going on?

Their relationship was on a rocky rollercoaster from the very start! Brown’s daughter didn’t approve of their relationship because of the hefty age gap between them, Big Ed being the older one. As for his part, Big Ed lied to Rosemarie on a regular basis, starting with his wanting children and how he looks! At one point, he told “Entertainment Tonight” in an interview that he had learned his lesson – it’s never good to lie. He said it’s better to be honest and get things out in the open, including strong feelings.

Otherwise, they come back and bite you, he continued. The whole time he was visiting Rosemarie in her native country of the Philippines, he managed to offend her. First, he wanted her to take a test to make sure she had no sexually transmitted diseases (hello, Ed, ever heard of a condom?!) Then he nagged her about not shaving her legs. There are many cultures in which women do not shave their legs unless they work in the “escort business”. Then he gave her mouthwash and told her she had bad breath! Yes, it’s good to be honest-but if someone has nothing good to say, then maybe it’s best they say nothing at all!

For her part, Rose exhibited superhuman patience with Ed, up to a point. She stuck with him through all his disrespectful actions until he told her he didn’t want children. At that point, she broke up with him, for good at the time. He apologized on the show, saying he should have been more truthful about such a major issue as having children. He said he wanted to get to know each other better first to make sure they were compatible. Rose countered she thought she knew him-once she found out what was true about him!

'90 Day Fiance – The Other Way' Spoilers: Three Ways That Jenny And Sumit Can Reach Their Goal #90DayFiance https://t.co/iZWJML7S9l

She blamed her bad breath on an ulcer and was disappointed with his continual embarrassment of her. Then she said she thought he doesn’t love her. Last month, a 90 Day Fiancé fan account posted an image of Big Ed filming with a “date” that from a distance, looked like it could have been Rosemarie. Now she has also hinted that she is actively filming again on her Instagram. In the photo, she is getting her hair and makeup done while being surrounded by a camera crew. She captioned the photo that she was making something special for her fans.

After their season of “90 Day Fiancé-Before The 90 Days” had finished up, she and Big Ed seemed to have at least reconnected in a friendly way. They did argue about the details of their post-show contract on the tell-all. Big Ed said he was ready to try again with her until he found out she was seeing someone else at the time. However, she was so upset with him on the tell-all it would be surprising if they actually were back together!

Stay tuned to TLC’s “90 Day Fiancé-Before The 90 Days” and check here frequently for all the latest news, updates, and gossip about all your fave “90 Day Fiancé” shows and stars!