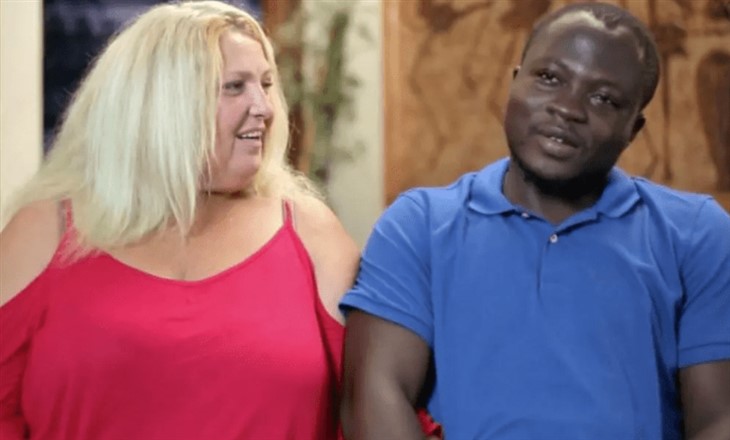 TLC’s “90 Day Fiancé-Happily Ever After” couple Angela Deem and Michael Ilesanmi managed to get through their Nigerian wedding just fine, albeit a tense moment when no one was sure if Angela would make it through the part of the vows that had the word “obey” in it!

Angela finally managed to say the word “obey” through gritted teeth, and they were officially pronounced man and wife. However, Angela was a little concerned if Michael would be approved for the spousal visa since he hadn’t been approved for the fiancé visa. This concern was what caused part of her pre-wedding anxiety. So the big question is now, several months after the wedding was filmed, has Michael been able to move to the US with Angela?

“90 Day Fiancé” fans were first introduced to the couple on Season Two of “90 Day Fiancé-Before The 90 Days”. There, viewers learned that Michael had been denied a K-1 visa, which is the fiancé visa, and how the couple met on social media and met for the first time in person on the show. It was a three-year journey to their wedding on the show on Sunday, September 14.

After their reception, which was full of fun Nigerian customs such as Michael throwing money on Angela as they danced, they went to a local bar for a nightcap before returning to their Nigerian apartment. At the bar, they relaxed with cocktails and discussed their next steps, the first of which was the CR-1 visa application.

90 Day Fiance – Michael Ilesanmi And Angela  Deem Talk About The Spousal Visa, But Then A Death Occurs In The Family And Coronavirus Strikes

Michael agreed they should start on the application right away, which could be a several months process. They both agreed to pray for quick approval, even though “quick” could take six to eight months. The wedding took place in January 2020, so this has been nine months in September 2020, when the episode aired.

Angela had intended to return home to file for the spousal visa, which apparently has to be done in the United States by the American spouse, right away, but then that night she got an emergency call from her daughter Skyla back home that her ailing mother, Glenda Standridge, had been rushed to the hospital and was in the intensive care unit.

'90 Day Fiance – The Other Way' Spoilers: Yazan Needs To Give Brittany Time And Space – She Is Returning To Jordan #90DayFiancehttps://t.co/hu0MpxdgUK

Mrs. Standrige was hospitalized for a couple of weeks and passed away on February 8. When looking through Angela’s Instagram, it does mention Michael on the obituary which Angela posted on Instagram, and it does imply he has made it to the United States in the wording but Angela may have merely had it written that way to avoid questions as to why she was shown living in Hazlehurst, Georgia while Michael, referred to as Glenda’s son-in-law, would have shown he was living in Lagos, Nigeria – if in fact, he is still there.

If she was able to get the filing done right away in spite of her mother’s hospitalization, or even if she was able to file before March when the coronavirus pandemic struck, he may be with Angela in the United States – there are no further clues in her Instagram that come right out and say so, however!

Stay tuned to “90 Day Fiancé-Happily Ever After” on TLC, and check back here frequently for all the latest news, updates, and gossip about all your fave “90 Day Fiancé” shows and stars!