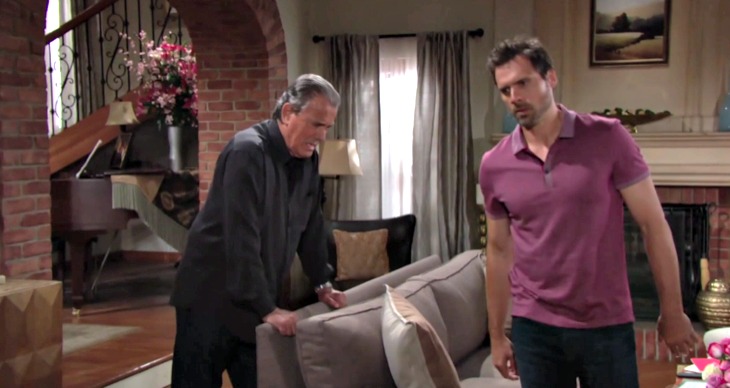 The Young and the Restless (Y&R) spoilers tease that Nick (Joshua Morrow) and Victor Newman (Eric Braeden) will join forces as they work to prove the Newman family is innocent of JT Hellstrom’s (Thad Luckinbill) murder. They will have to work overtime to prove their innocence as Christine (Lauralee Bell) and Rey (Jordi Vilasuso) worked to prove they are guilty.

On Thursday, January 3, Victor questioned Nick. He wondered if Nick could have killed JT and then tried to pin it on him. Nick denied that he had anything to do with the murder, suggesting that it was his dad that did it. After all, Nick points out, Victor threated JT on live television.

Victor said that he wasn’t serious and he didn’t harm him. With both of them declaring their innocence, they wonder who could be behind JT’s death.

Nick Suggests They Work Together

In a strange turn of events, Nick asks his dad to work with him to find JT’s real killer. Nick believes his dad is innocent and he wants to do what’s best for the Newman family. Little does either man know right now, the real killer is Nikki (Melody Thomas Scott), and she did it to protect Victoria (Amelia Heinle) from JT’s abuse.

Nikki decides to tell Victor that she was the one who killed JT. He listens as his wife tearfully confesses how she killed JT to protect Victoria. After she stops talking, Victor tells her not to ever tell anyone else what she did. He declares he will fix this and she will not serve any time for this.

How long do you think Nick and Victor’s truce will last? Who will take the fall for JT’s murder? Don’t forget to come back later for more Young and the Restless (Y&R) spoilers, news, and casting updates!