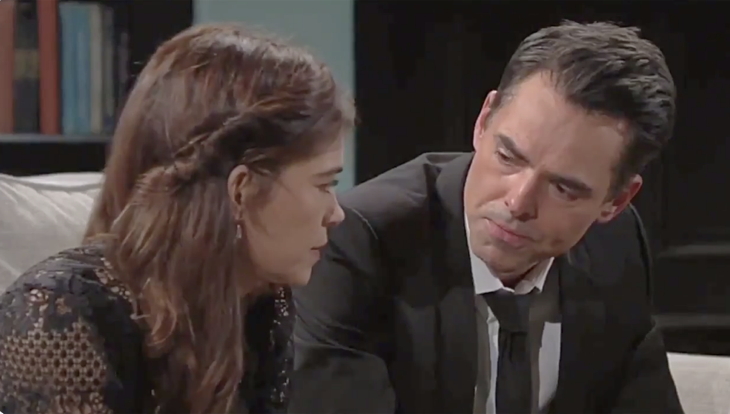 “Young and the Restless” (YR) spoilers for the week of Monday, April 8, 2019, through Friday, April 12, 2019 tease that “It’s a week of taking chances, risks, and down and dirty blackmail.” We have a very exciting week heading our way and you will not want to miss a moment of the action!

In the newest CBS “The Young and the Restless” promo video we see Sharon McAvoy (Sharon Case) confronting Rey Rosales (Jordi Vilasuso) about the ultrasound picture she found that Mia Rosales (Noemi Gonzalez) left for him. Rey will tell Sharon the reason he hasn’t told her about it is that he just wanted to be happy for a little while.

Sharon will actually be more understanding then he anticipated. Rey will tell her that he doesn’t even know if the baby is his. Sharon will go to confront Mia and let her know she plans to stand by Rey but while they are talking Mia will have pain and land in the hospital.

While at the hospital Mia will be shocked when Rey insists on them doing an ultrasound and a baby pops up on the screen. Once alone with the doctors, she will ask questions and they will tell her she is about 12 weeks pregnant. Does this surprise you?

Meanwhile, Y&R’s Billy Abbott (Jason Thompson) will refuse to leave Victoria Newman’s (Amelia Heinle) hotel room and will make his case to her of why they belong together. Billy will also confront Victoria about sleeping with random guys but says he has no place to judge. Billy just knows Victoria is not acting herself and does not want her to do anything she will regret. He feels like they are good for one another and will kiss her. They will start making out until they are interrupted by Victoria’s phone. Would you Y&R fans like to see Billy and Victoria back together?

Y&R Spoilers: For The Other Residents Of Genoa City

As you can see we have a very eventful week coming up, so make sure to stay tuned to CBS “The Young and the Restless.” Don’t forget to check often with Soap Opera Spy for all your latest spoilers, news, updates, and much more!