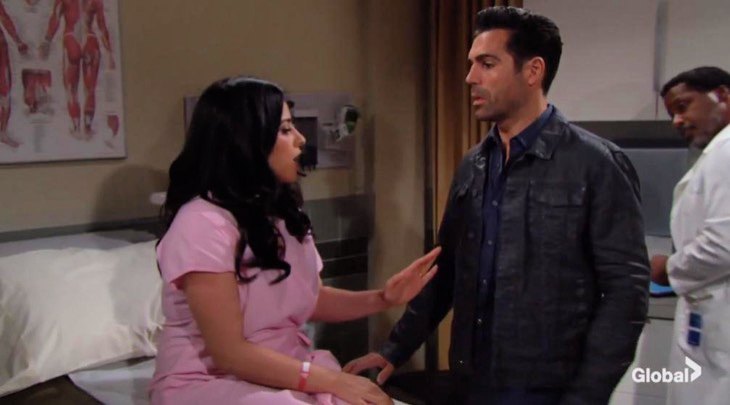 “The Young and the Restless” spoilers for Monday, April 8, tease that Victoria Newman (Amelia Heinle) won’t be happy about Billy Abbott’s (Jason Thompson) trip to Las Vegas. In her hotel room, Victoria berates Billy for following her and leaving their children for this confrontation. She wants him to go, but he finds Brandon Rose’s (Mitch Eakins) note and rants about her random hookup.

Victoria points out that she’s single and just wanted to forget all the drama in Genoa City. Billy confesses that he has no room to talk due to some of his own behavior, but he still doesn’t like any of this. He wants Victoria to stop running from their reunion and accept that they’re endgame. Victoria feels like they’re already tried and it didn’t work, but Billy pushes to try again and gives her a kiss.

Brandon interrupts with a text about Victor Newman (Eric Braeden). He wonders if Victor will make an appearance at a high-stakes poker game that’s coming up tomorrow night. Victoria lets Billy know that her father’s up to something.

Young and The Restless Spoilers: Sharon Newman Confronts Rey Rosales About The Ultrasound

Back in GC, Sharon Newman (Sharon Case) arrives at Rey Rosales’ (Jordi Vilasuso) apartment and wants to know when he was planning on telling her about the ultrasound photo. Rey isn’t even sure it’s his baby, so Sharon determines that Arturo Rosales (Jason Canela) could be the father instead. After they hash things out, Sharon decides to summon Mia Rosales (Noemi Gonzalez) and end her efforts to stop them from being together.

At the athletic club, Mia looks awfully chummy with the same pregnant woman she appeared to buy urine from. She gets Sharon’s call and marches over to Crimson Lights soon after. Sharon warns Mia that she’d better not come on her property again. If she does, Sharon intends to have her arrested.

Mia notes that she’s giving Rey a baby and Sharon underestimates what that means to him. Sharon contends that Rey doesn’t have to have anything to do with Mia. He can still be there for the baby if it’s even his. Mia feels like Rey will get bored with Sharon, but she’s caught off guard by terrible pain. After Mia doubles over and clutches her abdomen, Sharon contacts Rey and takes Mia to the hospital.

Mia tries everything she can think of to avoid being examined, but Rey insists on an ultrasound to make sure everything’s OK. Much to Mia’s surprise, she learns she’s actually pregnant. The doctor confirms that she’s about 12 weeks along and the scare she had was no biggie. The baby’s doing just fine.

Next week on #YR, Mia gets a shock, Lola has a proposal for Kyle, and Billy and Victoria discuss their relationship. pic.twitter.com/JC5ynWj2Pg

Just outside Mia’s exam room, Rey and Sharon discuss the paternity drama. Sharon assures Rey that she’s going to stand by him, so they hug while Mia shoots them an evil look through the glass. On the fire escape, Tessa Porter (Cait Fairbanks) starts working on a new tune and calls Mariah Copeland (Camryn Grimes) out to come hear it. Mariah secretly records it and wants to send it to Devon Hamilton (Bryton James).

Tessa objects, but Mariah ignores her and does it anyway. She plays the song for Devon and he likes what he hears. There’s just the matter of Tessa lying and burning him in the past. Mariah praises Tessa’s talent and urges Devon to trust her since he can’t trust Tessa. He can’t guarantee anything, but he’s willing to consider helping her out.

At Devon’s penthouse, he lets Ana Hamilton (Loren Lott) have a shot at producing Tessa’s song. She wants to hear it live, so Mariah sets everything up and Tessa plays for Ana at Crimson Lights. Tessa notes that her music’s evolving just like she is and plays a song about turning things around.

“The Young and the Restless” spoilers say another great episode’s coming up. We’ll give you updates as other Y&R news and rumors emerge. Stay tuned to see what’s next on the CBS soap.