The Young and the Restless spoilers indicate that Mariah Copeland (Camryn Grimes) life is in danger with her stalker on the prowl.

A few weeks ago, Mariah and her girlfriend Tessa Porter (Cait Fairbanks) were enjoying a romantic night at Crimson Lights. Their evening was interrupted when someone threw a brick through the window along with a threatening note.

At first, fans believed that Mariah’s mother Sharon Newman (Sharon Case) was the intended target and the culprit was Mia Rosales (Noemi Gonzalez). But that theory was quickly ruled out when Mariah began receiving mysterious texts.

With a stalker watching her every move, Mariah’s life is in danger. But the big question is, who is the stalker? A few theories have popped up on the mysterious person targeting Mariah. At the top of the list is Tessa.

Young And The Restless Spoilers – List Of Suspects Growing

She’s the number one suspect because of her past behavior. If you’ll remember, Tessa has a history of lying and her most recent devious stunt involved blackmailing Victoria Newman (Amelia Heinle) over the murder of JT Hellstrom (Thad Luckinbill). 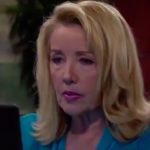 While Tessa seems like an obvious suspect, fans aren’t convinced  it’s her because of her love for Mariah. If it’s not Tessa, it could be someone connected to her. A couple of months ago Tessa was desperate for money because she needed it to help her sister Crystal Porter (Morgan Obenreder).

Tessa claimed a group of bad guys were holding her sister hostage for ransom. Even though Tessa paid them, the men could be after more money and using Mariah to get it.

Another suspect on the list is Ana Hamilton (Lorna Lott). She’s seems to be an unlikely suspect, but on soap operas anything is possible.

Young And The Restless Spoilers – Could It Be Ian Ward?

Ana has been helping Tessa restart her music career, and the music producer has clashed with Mariah when it comes to Tessa. It could be possible that secretly Ana has a crush on Tessa and is trying to scare Mariah away.

The last suspect on the list is Ian Ward (Ray Wise). Mariah was a member of Ian’s cult before she broke away from him. Ian has a habit of popping back into Genoa City to cause trouble. So it wouldn’t be surprising if he’s back and has set his sights on wrecking havoc in Mariah’s life.

Who do you think is stalking Mariah?