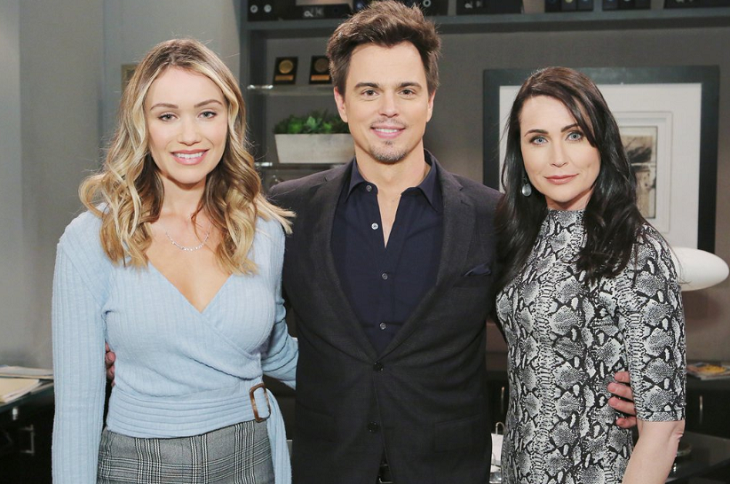 Quinn Forrester (Rena Sofer) hasn’t liked the idea of Sally Spectra (Courtney Hope) being with Wyatt Spencer (Darin Brooks) from the jump on the Bold and the Beautiful. In her mind, Sally is Flo Fulton-Logan’s (Katrina Bowden) lesser.

Well, Quinn is right. Sally isn’t like Flo, meaning that she didn’t claim to be Phoebe Forrester’s (Isabella de Armas and Redford Prindiville) birth mother and then continue to withhold that incredible truth in order to remain in the Logan family’s good graces.

As the latest spat between Quinn and Sally breaks out, B&B fans know who’s actually the better person. Meanwhile, Wyatt has also adopted (pun toward Phoebe-Beth intended) his mother’s attitude in thinking that Sally is beneath him.

Accidentally seeing Sally embrace Thomas Forrester (Matthew Atkinson) allowed Quinn to deepen her beliefs about Miss Spectra. But that hug was purely a show of compassion for someone who’s been forced to raise Douglas Forrester (Henry Joseph Samiri) alone due to Caroline Spencer’s (Linsey Godfrey) death.

Quinn couldn’t wait to tell Wyatt what she’d seen. He took the information his mom gleefully delivered and gave Sally a chance to explain herself. She had nothing to admit to, on that plot point.

It must be said that Sally’s knowledge gain of Thomas’ plan to upend Lope should have been passed along to Wyatt. Liam Spencer (Scott Clifton) is his brother and deserves to know about this threat. However, Sally is giving Thomas the benefit of the doubt, as she knows his emotions are scattered due to Caroline’s passing.

Wyatt’s subsequent read of Sally’s smartphone text message represented his own relationship insecurity issues. Thomas’ message, regarding their secret, then fueled Wyatt’s developing notions about Sally and the bolt to Flo’s abode.

Sally innocently hugged Thomas. Wyatt returned Flo’s latest kiss and is taking her to dinner. That makes Quinn happy. But she, like Wyatt has no idea what type of serious legal trouble Flo is involved in.

It may already be too late for Wally, who make a cute couple. They haven’t been together for long, which contrasts significantly with length of time that Wyatt and Flo have known each other.

Yes, Sally isn’t comparable to Flo. It could be that Wyatt never stopped loving Flo. Maybe the Phoebe-Beth reveal won’t adjust his opinion of her when it happens.