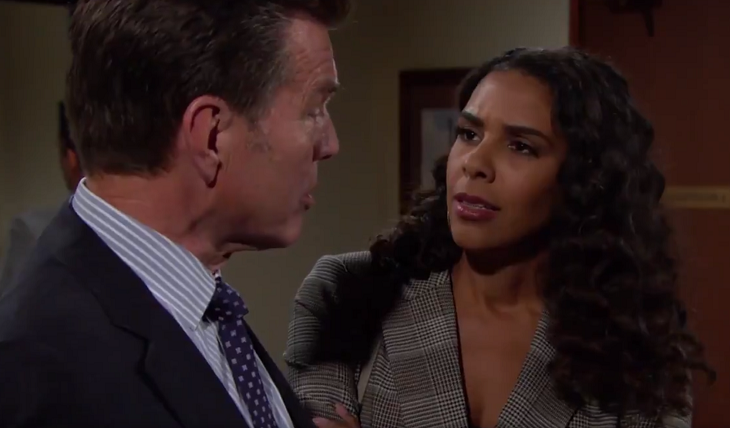 Real life news broke on the Young and the Restless (Y&R). Alice Hunter (Kerry) is leaving the cast. The actor confirmed the information via social media, with an included photo post of a classy going away party that was held by her colleagues.

No exact last episode date was revealed, though Y&R records approximately six weeks in advance. So Kerry could depart as late as next month.

As a result of the above, Jack (Peter Bergman) will likely lose yet another love. This loss should be devastating, as Kerry finally seemed to be someone who he could build a normal relationship with.

It hasn’t yet been revealed how Hunter’s character will be written out of the cast. But she said that Kerry would be taking an indefinite hiatus that was earned, which is a storyline tease wink to the fans.

Young And The Restless – Was Kerry’s Excuse For The Needle True?

Devoted Y&R viewers recently learned, along with Jack, that Kerry’s hypodermic needle wasn’t a cause for concern. After questioning what he found, Kerry told Jack that she didn’t have a major health concern and wasn’t an addict.

Instead, Kerry said she was in the midst of a medical process. Miss Johnson claimed she was freezing her eggs and needed to use the needle as part of the procedure. Time will tell if that was a story, or even if true, was the whole story.

Hunter’s exit is a shame for the show and for Y&R’s fans. Kerry’s addition to Genoa City (GC) came after Eileen Davidson (Ashley) announced her voluntary departure from the cast last year. Phyllis (Gina Tognoni) utilized existing contacts to recruit Kerry to Jabot, hiring her as the cosmetic’s company’s replacement lead chemist.

Young And The Restless  – Jack Will Be Left Alone Again

Initially aloof, it was somewhat surprising that Kerry would fall for Jack so quickly. Longtime soap fans wondered if Bergman’s ever-romantically frustrated character might be building a stable relationship? Unless a recast is coming, the answer to that soapy question appears to be no.

Davidson’s pending return to Y&R is only scheduled for a few episodes. Ashley’s France-based company, My Beauty, is doing well, which is one factor that prevents her even considering a move back to GC. So either Jabot will replace Kerry with a new character, or this fictional slot won’t be a main focus in the near future.

As for Hunter, the talented actor is wished well in her life and career, hopefully including a return storyline for Kerry someday.

The Young and the Restless Spoilers: Devon Curious About Ana's Secret — What Is She Hiding?#YRhttps://t.co/lRk99IL9qD

General Hospital Spoilers: Is Dawn Of Day A Front For Human Trafficking?