“The Young and the Restless” spoilers for Friday, March 8, tease that Victoria Newman (Amelia Heinle) will give her side of the story. On the stand, Victoria recaps how she got back together with J.T. Hellstrom (Thad Luckinbill), who became both physically and emotionally abusive. Michael Baldwin (Christian LeBlanc) presents notes from Victoria’s therapist as well as footage of an altercation with J.T.

Victoria contends that she only hit J.T. once when she was fighting back. She eventually gets to when she decided she’d had enough and dumped J.T. Victoria describes the break-in and how they all lied about what happened at the girls’ night party. They were scared no one would believe how terrifying the whole encounter was.

Michael pushes Victoria to discuss Nikki’s actions next. Victoria assures the court that Nikki wasn’t trying to kill J.T. She simply wanted to protect her daughter and had to act fast. Victoria explains that Phyllis Summers (Gina Tognoni) convinced them all to hide the truth, so Michael thinks it’s ironic that she was the one to get immunity.

Christine Williams (Lauralee Bell) grills Victoria next. She gets Victoria to admit she wasn’t seriously injured during her fight with J.T. and got engaged to him later. Victoria also confesses that was the last time J.T. got physical until that fateful girls’ night. 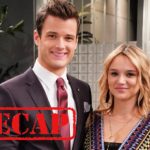 Christine points out that Victoria discovered J.T. had been investigating Victor Newman (Eric Braeden) for the GCPD. She thinks that was the real reason for their split. Christine wraps up by discussing the burial and how they concealed everything. Michael questions Victoria again, who insists she’d be dead if it hadn’t been for Nikki. It ends up not going on the record, but Michael’s point is made.

During a recess, Billy Abbott (Jason Thompson) rants about Phyllis convincing the others not to call 911. Nick Newman (Joshua Morrow) is focused on J.T. and the possibility that he’s still alive. He feels like it could be the key to getting Victoria, Nikki and Sharon Newman (Sharon Case) out of this jam.

Later, it’s time for closing arguments. Christine once again paints a picture of vicious women who buried a man like roadkill. She thinks a guilty verdict is necessary or else a dangerous message will be sent. Michael’s summation concentrates on reasonable doubt and how the prosecution has treated J.T. like the victim when these women are the real ones. He argues that the jury must choose not guilty.

Young And The Restless Spoilers – Rey Professes His Love For Sharon

At Rey Rosales’ (Jordi Vilasuso) apartment, he faces an angry Mia Rosales (Noemi Gonzalez). She’s still upset about Rey’s love confession to Sharon, but he insists he’s committed to Mia. When the shouting match continues, Rey ultimately determines that Mia’s right. He’s in love with Sharon, so there’s no hope for this marriage.

Mia protests, but Rey stands his ground. He points out that Sharon isn’t even the main reason this can’t work. Rey brings Mia’s betrayal with Arturo Rosales (Jason Canela) into it as well as what Mia did to Lola Rosales (Sasha Calle). He intends to be there for their baby and for Mia as this child’s mother, but that’s the extent of what their relationship will be.

After Rey heads off to go visit Lola, Mia cries alone. “The Young and the Restless” spoilers say Mia will make some desperate moves soon, so it should be interesting to see what she comes up with. We’ll give you updates as other Y&R news and rumors emerge. Stay tuned to see what’s next in Genoa City.

The Young And The Restless Spoilers: Paul’s Return Telegraphed By Rey’s Legal Problems – Christine And Husband Enforce The Law#YRhttps://t.co/63RfXjtZhn

Bold and the Beautiful Spoilers Friday, March 8: Taylor Lobbies For Steffy To Reunite With Liam – Flo Wants To Tell Hope The Truth