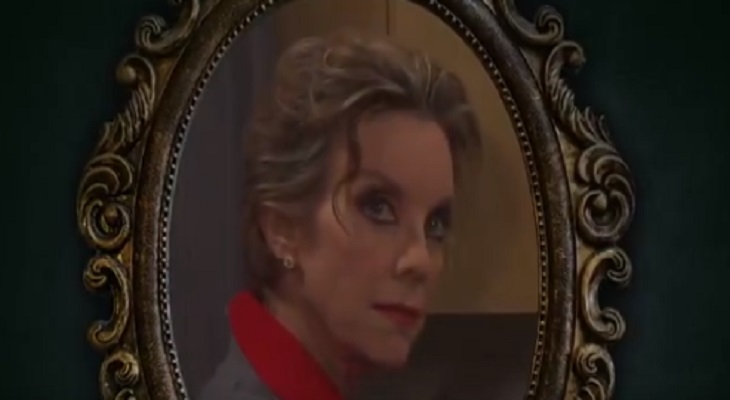 Days of Our Lives’ Claire (Olivia Rose Keegan) waits until Haley (Thia Megia) is upstairs and then calls Eve (Kassie DePaiva). Eve doesn’t want to meet with Claire, but Claire changes her mind. She tells Eve they need to talk about Haley and makes plans to meet her in the park. Tripp (Lucas Adams) comes in and asks who Claire is talking to; she starts to spin a story – she pretends she got called back to work, Tripp offers to go instead.

Claire tells him he needs to stay with Haley because they are friends. Haley comes downstairs, and Tripp asks if she took a nap. He tells Haley that no one will find her there. Claire returns with food telling Haley she knows she is hungry and encourages her to eat and relax. She pretends to want to be friends to set Haley’s mind at ease.

Jennifer (Melissa Reeves) tells Jack (Matthew Ashford) he’s going to lose his soul and his family and makes it clear his son J.J. (Casey Moss) will hate him. Jack tells her that he is doing what is best for J.J. by getting rid of Haley. She then brings up how Jack used to be. He says the old Jack is dead let him rest in peace.

A nurse from the hospital thanks Jack for his stand on immigration. Jennifer defends Haley and tries to convince Jack he is doing wrong, but he refuses to listen. Eve witnesses Jennifer and Jack talking and interrupts telling Jennifer she can’t speak to Jack anymore without going through her as his campaign manager. 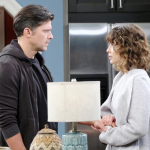 Days Of Our Lives – Sonny Wants To Crack A Safe

Sonny (Freddie Smith) and Will (Chandler Massey) discuss getting information to use against Leo (Greg Rikaart). Sonny wants to practice safe cracking on Victor’s (John Aniston) safe. As he goes to practice he runs into Leo. Sonny wants Leo to give him a divorce, but he refuses to do so. He offers Leo alimony to make him go away. Leo says he can stay in the mansion and live it up while Sonny and Will go to prison.

Sonny plans to have Leo arrested when this is over then looks up instructions on how to break into a safe. Sonny tries time and again to crack the safe, but it doesn’t work. Will calls Sonny and informs him that John (Drake Hogestyn) is going to Diana’s (Judith Chapman) to open the safe himself and asks him to keep Leo busy.

Diana daydreams that Marlena (Deidre Hall) dies and John comes to her for comfort. She wants to kill Marlena to get to John but can’t decide how to do it. She continues to dream up different scenarios of Marlena’s death and John turning to her. Diana imagines Marlena killed by a car, then in a plane crash but decides she can’t cause that to happen.

Afterward, she decides to find an easier way to kill Marlena and get her out of John’s life for good. Diana goes to the square and overhears Jack’s conversation with the nurse complaining about Haley. Later, she heads to the hospital to get some information on Marlena. Diana claims to want documentation that Marlena was aware of Haley’s immigration status. She gets into Marlena’s file and discovers that her nemesis is allergic to penicillin.

Days Of Our Lives – Marlena Insists John Help Will

Marlena and John  meet at the pub and are waiting on Kayla to bring them DNA test results. John and Marlena discuss how Diana wants John for herself. Will meets with them, and he and Sonny think they found a way to take care of Leo. Will, John, and Marlena all apologize for what happened with Leo in the square. Everyone agrees that they overreacted that day and agree to work together.

Will tells John and Marlena about Leo going to the safe, but they don’t know anything about cracking into one, Marlena says they know someone who does. John agrees to get into the safe and see what Diana is hiding. Marlena gets a call saying the test results she was waiting on are ready. She tells the nurse she is on her way to get the result. Meanwhile, John goes to Diana’s and gets a file out of her safe, but before he can look at it Leo is standing at the door. Leo has looked up instructions on breaking into a safe and plans on breaking into Diana’s safe himself.

Claire tells Eve that Haley is hiding at their place. Claire makes Eve promise to keep Tripp safe and not let him know she said anything. Eve questions why Claire is doing this, she claims to want to do the right thing. She wants Claire to tell her the real reason she wants Haley gone. Claire explains to Eve that Haley and Tripp are close and she wants Haley away from Tripp.

She goes on to say that she doesn’t want to be on the wrong side of this argument. Haley is sweet, and Claire doesn’t believe she wants to hurt anyone. She suggests that Haley is a good nurse and shouldn’t be deported but Eve convinces her that Haley wants to come between her and Tripp.