By Heather HughesLast updated May 8, 2019 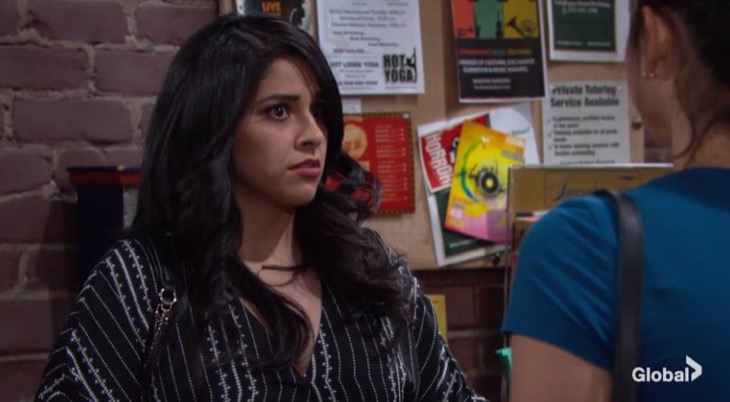 “Young and the Restless” spoilers for Thursday, May 9, tease that Jack Abbott (Peter Bergman) will tell Lauren Baldwin (Tracey E. Bregman) about Phyllis Summers’ (Gina Tognoni) proposal. At Jabot, Jack admits he shut down Phyllis’ partnership idea. Lauren grumbles that Jack’s letting personal issues interfere with business, so he agrees to give it more thought.

Jack also mentions Dina Mergeron (Marla Adams) having to wear a tracker now. Lauren responds with compassion, which Jack appreciates. In New York, Theo Vanderway (Tyler Johnson) is impressed by Summer Abbott (Hunter King) and Kyle Abbott’s (Michael Mealor) latest efforts. He praises their strategies and chemistry before inviting them out to a club.

Kyle declines so he can return home to Lola Rosales (Sasha Calle), which clearly irks Summer. Back in Genoa City, Summer suggests Kyle’s devoting too much time to Lola and not enough to his position. After Theo calls and reveals that he’s bringing a client to town, Summer uses the opportunity. She tells Jack that Kyle isn’t there to do his job, so Jack orders Summer to track him down.

Young and The Restless Spoilers: Mariah Copeland Butts In Where She is Not Wanted

Meanwhile, Mariah Copeland (Camryn Grimes) butts in on Tessa Porter’s (Cait Fairbanks) meeting with Ana Hamilton (Loren Lott). She objects to the crazy new looks that Ana’s still trying to push. Mariah gripes about Ana trying to turn Tessa into a pop princess and insists she doesn’t understand who Tessa is.

Ana fires back at Mariah, whose expertise isn’t in this industry. She suggests she Mariah should let her do her job. Afterward, Tessa snaps at Mariah for crossing the line with Ana. It leads to an argument at Crimson Lights, where Mariah finally gets to the heart of the problem. She’s afraid what she loves about Tessa will disappear.

Mariah feels like, between all the changes and the success, there may be nothing left for her. Tessa assures Mariah of her love and promises she isn’t going anywhere. At Society, Lola learns Arturo Rosales (Jason Canela) is planning to head back to Miami with Mia Rosales (Noemi Gonzalez). They clash and it leads to Arturo blurting out something he shouldn’t.

Arturo insists Rey Rosales (Jordi Vilasuso) will put Mia behind bars if the baby isn’t his. Lola quickly figures out that Mia attacked her on Valentine’s Day. She puts together that Mia was after Abby Newman (Melissa Ordway) and got her by mistake due to the coat.

Young and The Restless Spoilers: Mia Rosales Admits She Pushed Lola Rosales In The Pool

Lola ends up tracking Mia down for a confrontation. They’re sparring as Abby arrives and joins in. Lola accuses Mia of attacking her with the intention of attacking Abby instead. Abby doesn’t hear a denial, so Mia eventually admits it and scrambles to explain. After Abby vows to call the police, Mia pleads with Lola to stop her.

Next, Mia meets back up with Arturo and chews him out for spilling the beans. She feels like Lola will listen to Arturo. Since Lola’s the only one who can press charges, Mia pushes Arturo to speak with her. Back with Lola, she tells Abby that Mia wouldn’t have intentionally hurt her. Lola also notes that the medical staff caught her liver problem and that might not have happened without the attack.

Plus, there’s the baby to consider. That’s Lola’s niece or nephew, so she isn’t keen on letting the kid be born in jail. Once Lola admits Mia and Arturo are leaving town anyway, she persuades Abby to keep her mouth shut. Soon after, Kyle appears and picks up on the weird vibe. He wants Lola to know they can handle whatever it is together.

At the penthouse, Devon Hamilton (Bryton James) listens to Ana complain about Mariah. He contends that people put protective armor up for a reason, which Ana finds wise. Later, Devon and Elena Dawson (Brytni Sarpy) discuss the kiss he planted. She fears he did it out of pity, but Devon assures her that’s not the case. It was an impulse after a dream, so they put it behind them.

“The Young and the Restless” spoilers say there’ll be more bumps in the road for Devon and Elena, but they’ll try to keep overcoming them. We’ll give you updates as other Y&R news and rumors emerge. Stay tuned to see what’s next in Genoa City.