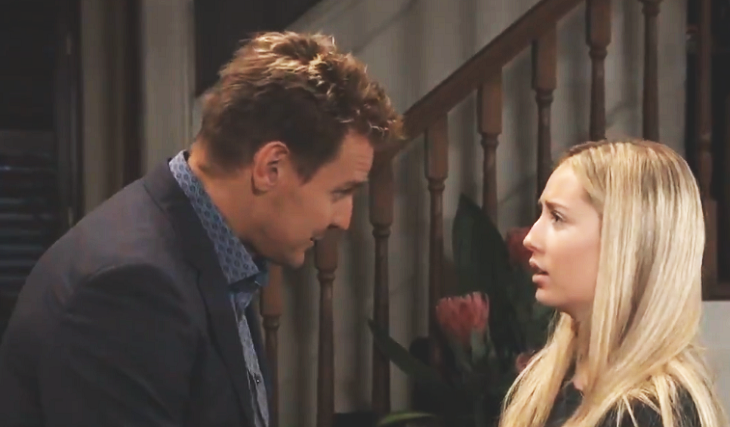 Jacks says Carly is worried about tension between him and Sonny Corinthos (Maurice Benard) and promises to keep it to a minimum. Jocelyn comes downstairs and hugs Jacks. Jocelyn misses Oscar Nero Quartermaine (Garren Stitt); Jacks wants her to tell him about Oscar. Jocelyn tells Jacks about her time with Oscar. Jocelyn asks Jacks if that was what happened with her grandmother, he says yes. She tells Jacks they almost finished their book, but she fell asleep for just a minute.

When she woke up, Oscar was gone. Jacks promises Jocelyn that Oscar felt her love. Sonny arrives to find Jacks on the sofa and offers him a drink. Jacks congratulates Sonny on the new baby. Sonny tells Jacks that Jocelyn needs him. Carly joins them and tells them Jocelyn is asleep. Carly asks if Jack and Sonny are getting along ok, Sonny says peachy. Jacks leaves for the Metrocourt and tells them he may buy Kate Howard’s (Kelly Sullivan) old place.

General Hospital’s Drew Cain (Billy Miller) is dreaming about Oscar when Kim Nero (Tamara Braun) covers him with a blanket and startles him. Kim brings Drew a telescope that he left with her years ago. Drew gives Kim a picture of the three of them together. Kim wonders if Oscar left anything else at the DOD house. Curtis Ashford (Donnell Turner) rings the doorbell; he tells Drew he would have been there sooner.

Drew claims to be ok, Curtis hugs him. Kim leaves Curtis and Drew to talk. Curtis tells Drew that Jordan Ashford (Briana Nicole Henry) needs a transplant and they may have one. Drew wants to take care of Jordan’s operation. Curtis argues the point with Drew but finally gives him the ok. Curtis promises to call Drew as long as Drew calls if he needs to talk.

Kristina questions how well Neil knows Alexis. Valerie shows up to see Kristina. Valerie is surprised that Kristina remembered her number. Valerie wanted to make sure Kristina was ok. Kristina asks Valerie if that pledge can be used, Valerie advises her to report it if she is blackmailed.

General Hospital’s Shiloh Archer (Coby Ryan McLaughlin) is getting ready to put a tattoo on Sam McCall (Kelly Monaco) when Jason Morgan (Steve Burton) breaks down the door and goes looking for her. Jason runs in and knocks Shiloh out with his pistol. Jason tells Sam it’s over. Jason tries to get Sam to leave with him. Sam tells Jason she will cover for him and sends him to get Kristina’s pledge.

Jason gets to the file room to look for Kristina’s pledge. Shiloh wakes up and asks Sam what happened; she asks what he remembers. Shiloh believes Jason did this; Sam tells him some guy was there ranting about his child. Sam wants to call the cops, Shiloh doesn’t want to do that. Shiloh wants to move on with the initiation; Sam says it will have to wait. Sam gets ice for Shiloh’s head, and Kim calls wanting to speak to him. Jason informs Sonny that Shiloh replaced the pledges with blanks.

Lucas tells Brad he is handing Shiloh money hand over fist to Shiloh. Willow overhears the conversation and tells Brad he cannot let Wiley anywhere near Shiloh. Willow goes after Brad calling him and Lucas bad parents for allowing Wiley around Shiloh. Lucas tells Willow to stay away from them, and they leave. Lucas asks Brad why Willow is so worried about Dawn of Day. Lucas makes a call to someone; he wants to discuss his family.

General Hospital Spoilers: Who Is Getting Engaged At The Nurses Ball? https://t.co/ikHuftXWPN pic.twitter.com/gIb30akq35

General Hospital’s Willow Tait talks to Harrison Chase about helping Kristina. Willow tells Chase that her mother knows she was pregnant when she left DOD. Chase offers to take Willow home; she wants to go home with him. Chase tells Willow she survived DOD, she needs to stop doubting herself. Chase tells Willow he understands why she acted so strongly with Brad and Lucas. Chase questions Willow about protecting Wiley. Chase asks if Wiley is especially vulnerable, Willow says Wiley is her son.