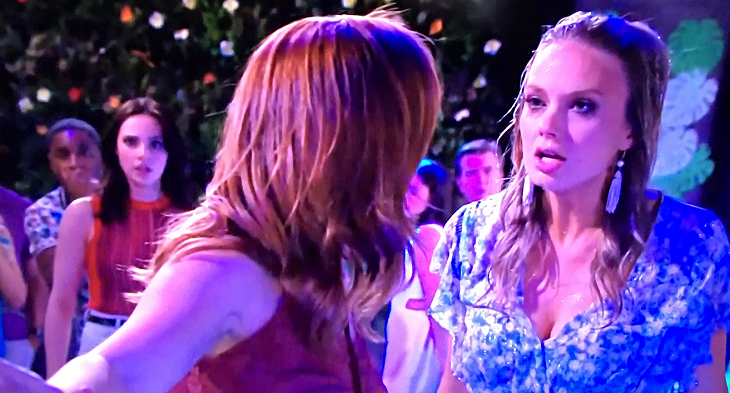 The Young and the Restless spoilers for Thursday, August 8, tease that Mariah Copeland (Camryn Grimes) and Tessa Porter (Cait Fairbanks) will prepare for the upcoming bachelor/bachelorette party at the rooftop bar. Sharon Newman (Sharon Case) and others will arrive for the party, but Mariah won’t get a chance to tell Sharon that Rey Rosales (Jordi Vilasuso) will be attending.

Meanwhile, at Crimson Lights, Billy Abbott (Jason Thompson) will have some books with him about communicating with ghosts, while across the room Theo Vanderway (Tyler Johnson) will meet up with Summer Newman (Hunter King) in advance of the party. Theo will promise Summer that he’ll put his best foot forward tonight, but he’ll look mischievous.

And at their apartment, Lola Rosales (Sasha Calle) and Kyle Abbott (Michael Mealor) will get ready for the party as Lola explains why she invited Summer to their big night. Kyle will say that he admires her for inviting Summer.

Next on Y&R, Rey will arrive at the party, much to Sharon’s dislike. They’ll speak privately and agree to stay away from each other for the night. Summer and Theo will arrive, to Mariah’s dislike. Then Kyle will show up and ask Theo to leave, but Lola will persuade him to let Theo stay. Billy and Sharon will find each other, and they’ll decide that neither of them wants to be there, so they’ll leave together.

Later, it will be time for speeches. Mariah will speak, then Tessa will perform a song while a video plays showing childhood photos of Kyle and Lola. Summer won’t be impressed. Next, Rey will speak, then Abby Newman (Melissa Ordway) will make a remark to Nate Hastings (Sean Dominic) bashing Summer for mocking the video. Summer will then confront Abby, and the two will go elsewhere for a conversation.

Next on Y&R, speeches will continue, with Jack Abbott (Peter Bergman) up next, and then Theo will start speaking into the microphone. He’ll say that it’s like Kyle’s life began when he met Lola, and he’ll wish that everyone could have seen the Kyle he used to know. At this point, Kyle will interrupt the speech and pull Theo off to the side, asking what’s wrong with him.

Kyle and Theo will bicker, and Theo will say that he’s tired of Kyle’s sanctimonious crap and that he isn’t going to let him forget who he used to be. Theo will refer a similar night many years ago, and how Kyle needs to get over it. Kyle will fire back that “she was 17 and could have died.” Theo will reply that everything turned out fine, but Kyle will indicate that Theo wasn’t the one who “paid off her father.”

Across the bar, Abby and Summer will have their own altercation. Abby will tell Summer to have some self-respect and just leave because Kyle doesn’t want her, and she lost. Summer will fire back that Abby is the perpetual loser and she’ll name all of Abby’s men, as they start shoving each other. Ultimately, Summer will drench Abby in ice water, and it will be a huge scene.

Next on Y&R, at Crimson Lights, Billy and Sharon will talk. Sharon will reveal that Rey found her with Adam, and Billy will be disappointed. Talk will turn to Billy and his visit with his therapist, but he’ll think that his situation might be too much for a therapist to deal with. He’ll tell Sharon about hearing Delia Abbott’s (Sophie Pollono) voice and the writing on the wall that he found. Sharon will ask if he’s suggesting that he’s encountered Delia’s ghost.

Next on Y&R, Chelsea Lawson (Melissa Claire Egan) will be thrilled as Connor Newman (Judah Mackey) and Anita Lawson (Catherine Back) arrive at Nick Newman’s (Joshua Morrow) house. Once Connor leaves the room, Anita will start in on Chelsea, complaining about how Chelsea is rebounding with Nick and wondering why she isn’t with Adam Newman (Mark Grossman).

Chelsea will explain about how Adam has changed and isn’t the person she used to know, and that she and Nick are only friends. As they discuss, Chelsea will sense that Anita may be feeling insecure, and she’ll offer her one million dollars of the money she received from Calvin, but Anita will refuse the offer, stunning Chelsea.

Young And The Restless Spoilers: Troublemaker Theo Wants Phyllis, Will They Sleep Together? #DAYS #dool #daysofourliveshttps://t.co/3yChWr1m5l

Finally, on Thursday’s new episode of Y&R, Connor will reappear, and he and Chelsea will talk alone about Calvin Boudreau’s (John Burke) death. Connor will ask Chelsea when they are going to go home, and Chelsea will explain that she’d like to live in Genoa City again.He’ll want to know why.