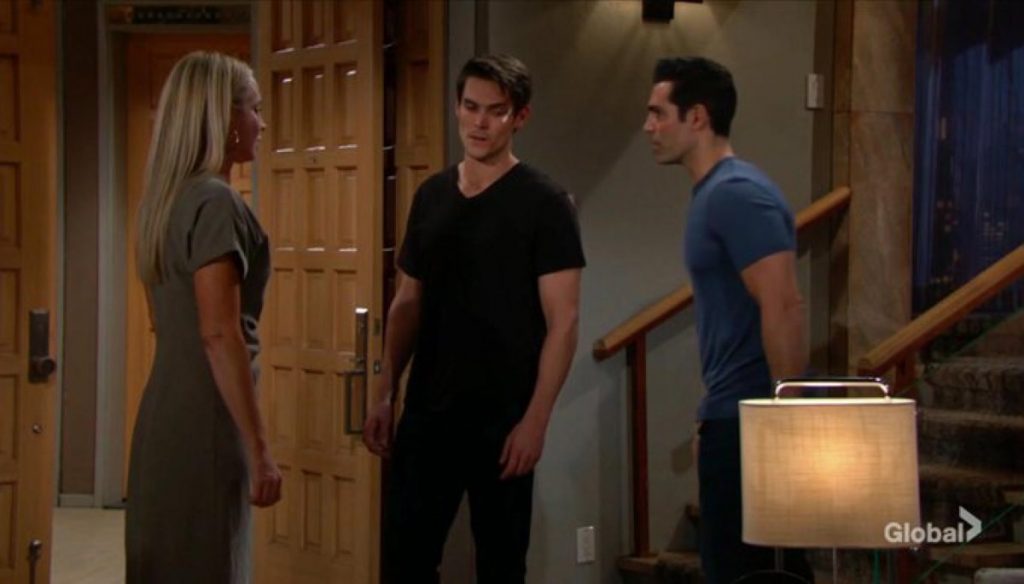 The Young and the Restless spoilers for Wednesday, August 7, tease that Adam Newman (Mark Grossman) will break away from Sharon Newman (Sharon Case) after their lovemaking to report his assault at the hands of Nick Newman (Joshua Morrow) to the police.

Meanwhile, at Crimson Lights, Phyllis Summers (Michelle Stafford) will be on the phone with Devon Hamilton (Bryton James) offering him an investment opportunity, but he’ll refuse, and she’ll cross his name off of her potential investors list. The last name on her list will be Nick’s.

Across the room, Billy Abbott (Jason Thompson) will talk with Rey Rosales (Jordi Vilasuso). Billy will offer his thoughts on Adam and say that he’s sorry about Rey’s breakup with Sharon and that Rey may have given up on Sharon too soon. Rey will then get a call about investigating Adam’s reported assault.

Next on Y&R, Nick and Chelsea Lawson (Melissa Claire Egan) will chat at Nick’s house. Chelsea will relay that her mom Anita Lawson (Catherine Bach) and Connor Newman (Judah Mackey) will arrive tomorrow. She’ll worry about telling Connor that Adam’s alive, and Nick will ask her to have dinner with him and Nikki Newman (Melody Thomas Scott), but Chelsea will refuse.

Later, Phyllis will arrive at Nick’s house to find Chelsea there alone. Chelsea will assume that Phyllis wants something from Nick, and the two women will bicker. Phyllis will refer to Chelsea as a gold-digger and berate her about being with Calvin Boudreau (John Burke). Chelsea will fire back that Calvin loved her, scars and all, and suggest that Phyllis can’t say that about anyone.

Y&R Spoilers – Billy Abbott Gets A “Message” From Delia Abbott

Next on Y&R, Billy will go to the Chancellor estate to get some answers. He’ll call out for Delia Abbott (Sophie Pollono), then get a text from Victoria Newman (Amelia Heinle) asking him to join the family for a movie, but he’ll text back that he’s working. He’ll examine the writing on the wall and out loud will talk to Delia, asking her to tell him what to do.

Ultimately, Billy will fall asleep and have a nightmare about searching for Delia. Afterwards, he’ll look at the writing on the wall again, which will say: “STOP ADAM NOW.” Victoria will text him again, and he’ll respond that he’s making progress. Finally, he’ll say out loud: “Message received, Delia. Loud and clear.”

Next on Y&R, Nick and Nikki will meet for dinner. They’ll discuss the scene in the park with Adam, as well as Sharon being there to witness the whole thing. Talk will turn to Phyllis, and how she made amends to Nick, then to Connor, then to Christian Newman’s (Alex Wilson) custody case.

Soon, Phyllis will show up and chat with Nick while Nikki’s on the phone with Victor Newman (Eric Braeden). She’ll want him to invest in her big opportunity, but Nick will refuse. He’ll reveal that he didn’t keep the portfolio that she and Victoria arranged to give him. A bit later, Phyllis will hit Nikki up as a potential investor, but that will fall flat as well.

Next on Y&R, Rey will show up at Adam’s penthouse, but Adam won’t let him in. They’ll discuss the assault and Adam will insist that he wants Nick arrested. Adam will reveal that he has a witness to the incident, and at that moment Sharon will appear, much to Rey’s surprise. Rey will be all business and get her confirmation that she witnessed the incident between Adam and Nick.

Afterwards, Adam will insist that he didn’t set it up for Rey to find Sharon there. Sharon will be peeved, and she’ll yell that Adam has set her world on fire and that this has to end. She’ll want to leave, but Adam will tell her that Rey will get over this and that she’s avoiding facing the truth. He’ll tell her that he just wants to make her happy, and that they belong together.

Sharon won’t be having it, and she’ll point out that Adam tried to reunite with Chelsea, but Adam will claim that he was just trying to get Connor back in his life. Adam will say that he’s what she’s wanted all along, but Sharon will bolt and tell Adam to stay out of her life.

Finally, on Wednesday’s new episode of Y&R, back at Nick’s house, he’ll tell Chelsea about Phyllis’ investment proposal and how he turned her down. He’ll say that he just wants to focus on the kids now, which will please Chelsea.