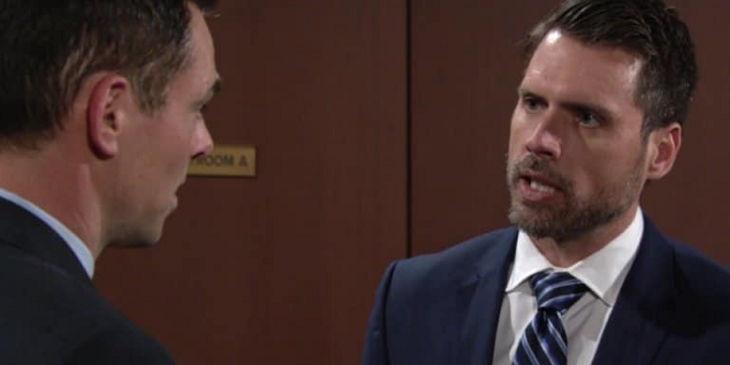 Meanwhile, the three ladies who were sentenced to hard time for their roles in Mr. Hellstrom’s death and then obstructing justice in the aftermath of the April 13, 2018, incident need a miracle. No, they deserve one!

Justice. That’s always a subjective word. In this instance, what justice did Nikki Newman (Melody Thomas Scott) receive by instinctively defending her daughter? Sure, she should have reported what happened and then not buried him. But circumstances being what they were, well, such are soapy decisions.

Young And The Restless Spoilers – Will J.T. Face Justice If He’s Alive?

How about Victoria Newman (Amelia Heinle)? That poor soul was, is, and remains the true victim of J.T.’s crimes. Assuming the trio of men find him alive, it will be possible that Luckinbill’s bizarrely written character meets a form of justice that the legal system would never apply. If not, then many years behind bars, combined with serious mental health treatment must be realized.

And then there’s Sharon Newman (Sharon Case). She had no real place at the then termed Girls Night In. But Case’s character was inserted into the storyline so she could live out her predetermined destiny.

The Nick-Billy alliance, all on its own, is interesting, though not surprising. Morrow’s character did more than diffuse anger when Billy got in Nick’s face after the verdict.

Nick’s open acknowledgment that Billy cares for Vickie made the guys instant allies. These often combative personalities and sometimes family members are a force to be reckoned with.

Combine Nick and Billy’s forces with Victor’s ruthless, relentless, resilient aura and J.T.’s ears must be burning. Whether that’s in an inflamed afterlife, or somewhere here on earth will soon be seen.

If the new back office crew at Y&R actually allows J.T. to be alive, then having Nick, Billy, and Victor locate the infamous villain would be most fitting. Nikki, Vickie, and Sharon, despite any and all mistakes they’ve made, deserve far better fates than being imprisoned.