“General Hospital” spoilers for Monday, March 18, tease that Jordan Ashford (Briana Nicole Henry) will urge Curtis Ashford (Donnell Turner) to open up. She’ll suspect he’s thinking about something, so she’ll want to talk about it. There’s no point in bottling things up, especially after the battle Jordan’s already endured. Now is the time to be honest and face any problems together.

Curtis will make an admission on Monday’s episode, so Jordan will have to address it. Perhaps this will be regarding Jordan’s health issues. She needs a kidney transplant, but Curtis knows how hard it is for Jordan to take it easy. He may fear that she will jump back into work and sabotage herself, but maybe she can ease his mind.

Across town, Peter August (Wes Ramsey) will be approached by Sasha Gilmore (Sofia Mattsson). She’ll want to talk about Nina Reeves’ (Michelle Stafford) wedding, so she might hope there’s some strategy to prevent it. Sasha isn’t thrilled about Nina and Valentin Cassadine’s (James Patrick Stuart) marriage for obvious reasons, but Peter may contend that they should focus on what Nina wants.

While Sasha and Peter have a deep discussion, Michael Corinthos (Chad Duell) and Carly Corinthos (Laura Wright) will try to do something nice. They won’t want Mike Corbin (Max Gail) to feel cooped up at the memory care center, so they’ll take him out for a little treat. Unfortunately, their plan to have a barbecue and a fun chat will go awry. Mike has declined rapidly, so he’ll end up having a meltdown. 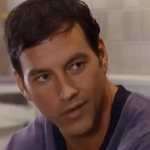 Other “General Hospital” spoilers say Lulu Falconeri (Emme Rylan) will long for her hubby. It’s brutal not knowing where Dante Falconeri (Dominic Zamprogna) is or if he’s OK. Lulu will fret to Maxie Jones (Kirsten Storms) and get some support on Monday. She’ll just hope Dante can make it home to her soon.

In Turkey, Dante will be in a tight spot. Raj Patel (Noshir Dalal) insisted that Dante should kill his father, but will Dante actually murder Sonny Corinthos (Maurice Benard)? No way! He’ll fire a shot toward Sonny, but he’ll make a strong case for keeping Sonny alive.

General Hospital Spoilers – Alex Will Get The Surgery She Needs

Dante will convince Raj that Sonny could be of use to them, so his boss will let him live for now. GH fans can expect Dante and Sonny to put a plot in motion soon enough. Back in Port Charles, a blind Alex Devane Marick (Finola Hughes) will show up. “General Hospital” spoilers say she’ll get the surgery she needs, but Anna Devane (Finola Hughes) will only be concerned about memory info.

Anna will confront Alex about which part of her life actually belongs to her sister. That’ll lead Alex to confess a never-before-mentioned mission that’s haunted Anna for years.She thought she really blew it back then, but Alex will reveal that she’s the one who failed. Naturally, Anna will want to know more. She’ll demand answers about any other false memories, but she’ll only get vague clue.