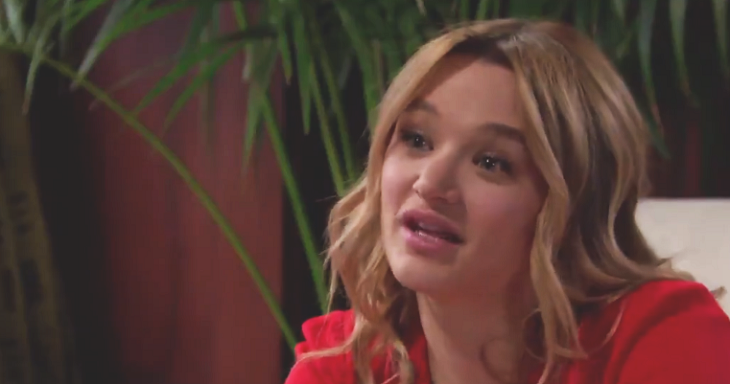 The Young and the Restless spoilers indicate that complications from Summer Newman’s (Hunter King) surgery could have an impact on future with Kyle Abbott (Michael Mealor).

After marrying in a quickie ceremony, the couple’s plans for a honeymoon were cut short when Summer underwent surgery to donate her liver to Lola Rosales (Sasha Calle). However, things didn’t go smoothly during Summer’s surgery, and Nate Hastings (Brooks Darnell) informed Kyle there were complications.

It’s not known what the complications are, but speculation is it’ll have something to do with Summer’s ability to have children.

Young And The Restless Spoilers – Could Summer Newman Be Pregnant?

Fans speculated that Summer and Kyle’s tryst during their wedding night could result in a pregnancy. Odds are that Summer could still become pregnant. However, the effects from the transplant could pose a danger to Summer and her baby.

Another scenario is that the doctors had to perform a procedure during Summer’s surgery which will leave her unable to conceive a child.

Whether Summer is able to have children or not, it’s going to have an impact on her future with Kyle. If she does become pregnant, and the pregnancy is high-risk, Kyle is going to be by her side, wanting to do everything to save her and their unborn baby.

Young And The Restless Spoilers – Kyle Abbott Will Feel Guilty

If she’s not able to have children, Kyle is going to feel guilty because Summer went through with the transplant to save Lola, his true love. Kyle’s guilt will keep him with Summer. The couple could grow closer as they deal with the aftermath of her surgery.

Whatever complications there were, it’s going to affect Summer in the long run. But this could be the thing to make Kyle realize that he loves Summer, and she’s the woman for him.

Do you think the complications will affect Summer’s plans for motherhood? Will this bring Summer and Kyle closer together?