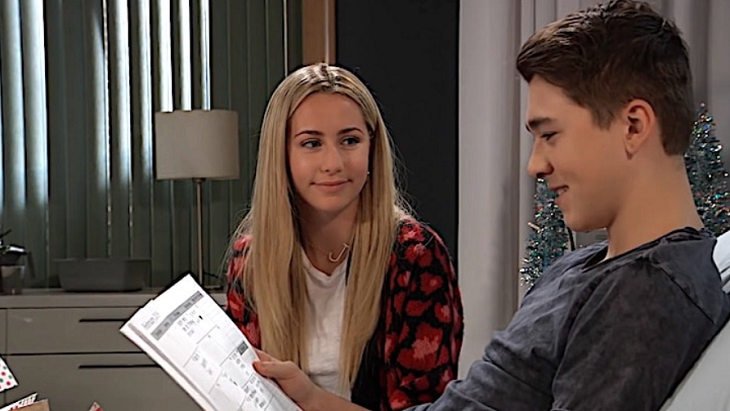 Eden thanks her “insanely talented GH writers” for taking her and apparently the cast in general, since she refers to “us all” on the ride of their lives, and she wrote she’s feeling every emotional. She also includes General Hospital fans in “us all”. It sounds like it’s going to be a roller coaster of ups and downs and twists and turns!

Eden doesn’t, of course, give any details, but going by current storylines on General Hospital and Joss being written as a mini me of her mother Carly Corinthos (Laura Wright) we can think of some possibilities. For one, Joss’s boyfriend, Oscar Nero (Garren Lake Stitt) only has a couple of months at best to live because of his brain tumor increasing in size.

reading my scripts for this week and our insanely talented #GH writers are taking us all on the ride of our lives and i am feeling literally every emotion and cannot wait for you to join us🙏 #Grateful #CarlysWorld #GHFansRock pic.twitter.com/VDkzLBrY9M

Just that itself, even though Joss is staying strong and positive for Oscar’s sake now, when they are together, is likely taking quite a toll on her inside. When he dies, she could really go off the rails if she’s pushing a lot of grief and fear down inside and not dealing with it now.

There are also other things happening around Joss that may or may not contribute to her stress and emotional well-being. She’s over the moon happy that she will be having a new baby brother or sister in a few months, but there’s always the possibility that could go sideways with it being a high risk pregnancy for Carly.

What if Carly had a scary situation such as going into preterm labor when Joss was the only one with her, and the baby was coming too fast for 911 to arrive in time?

Can you imagine a fifteen year old already in stress and grief from her boyfriend dying and then having to deal with that?

General Hospital fans know that Ingo Rademacher is currently filming, and of course that means Jasper Jax will be there when Joss’ wild ride is happening. So there is that!

Stay tuned to GH and keep watching General Hospital spoilers for all the latest updates, news, and developments as Jax, Joss, and GH viewers get ready for a wild ride!

General Hospital Spoilers: Is It Too Late To Rescue Kristina?