Young And The Restless Spoilers & Recap Friday, May 31: Adam Gets News – Nate And Abby Go On Date – Devon Sees Hilary 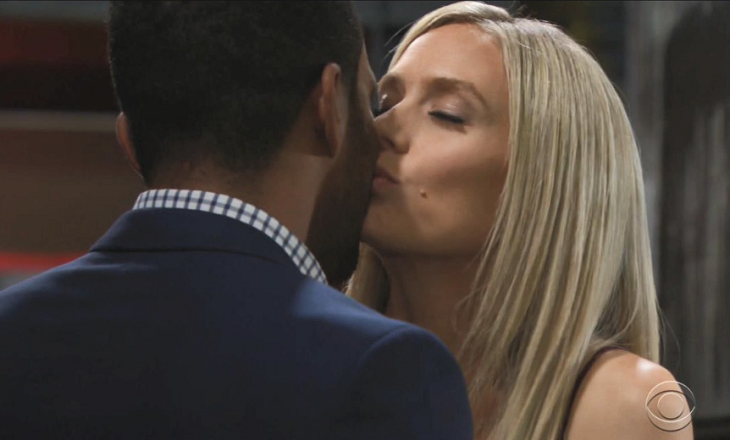 “The Young and the Restless” (YR) recap for Friday, May 31, 2019 reveals that Lola Rosales (Sasha Calle) opens the door to Kyle Abbott (Michael Mealor), who lugs in boxes of paint and supplies. She wanted an accent wall and he’ll always give her what she wants. Lola teases that he’s a nerd, and it’s adorable. Kyle has skills, they’re just not painting.

Lola updates him on the prep work needing to be done and he realizes it will take all night. She purrs the best things take all night. He lifts her up to start taping and she slaps a piece over his mouth when he complains. Kyle ends up with his shirt off and they start a paint fight.

At Sharon Newman’s (Sharon Case) place, she and Adam Newman (Mark Grossman) discuss her call to Chelsea Newman (Melissa Egan). She’s not sure she’s the right messenger – things got ugly between them before she left. Adam’s surprised to hear she bashed Sharon over the head. Adam sighs…he turns to Sharon because there’s no one else. Sharon’s unconcerned.

Adam wonders if she can teach him about forgiveness as Rey Rosales (Jordi Vilasuso) enters. Rey invites him to stay, but Adam decides to go. Sharon questions Rey, who reveals his priority working for Nick Newman (Joshua Morrow) is to watch Adam. Sharon explains his focus is on Chelsea and Connor – he asked her to call. They decide to celebrate his job. He’s stoked to make his own rules. Sharon thinks he’s channeling his inner bad boy and they make out. Upstairs, Sharon removes Rey’s belt and he throws her down on the bed.

Y&R’s Elena Dawson (Brytni Sarpy) comes downstairs at the penthouse, where Devon Hamilton (Bryton James) is up with insomnia. They flirt while sharing his fruit and she calls him a gentleman. He got that from Neil Winters (Kristoff St. John). Talk turns to the will reading. Devon couldn’t help but hear Neil’s voice. They feel their parents are looking down on them.

Elena keeps waiting for peace, and is sorry Devon has lost so many people he loves. Devon puts on some jazz – he now knows what Neil loved about it. They slow dance. Devon tells Elena he likes her, and they kiss. Devon then looks up and sees Hilary Curtis (Mishael Morgan) standing on the stairs. Elena realizes something’s wrong and goes upstairs to try to get some sleep.

Young And The Restless Spoilers – Tessa Porter Is Frustrated

Mariah Copeland (Camryn Grimes) and Tessa Porter (Cait Fairbanks) arrive at their loft debating whether Tessa had a good night playing at the park or not. They discuss Ana Hamilton (Loren Lott) trying to change her and Tessa feels she was right about her needing an image. Mariah decides they’ll have a fashion show, but after trying things on, Tessa becomes frustrated.

Mariah talks about being on TV not feeling like a fit, but switches back to Tessa – they need to return all the clothes. She produces a red blouse from the GC Buzz wardrobe department, and they toast to more Tessa with a dash of Mariah. After, Mariah helps her off with the blouse as they kiss. They pull out the sofa bed, undress more, and kiss passionately as they prepare to make love.

At Society, Y&R’s Abby Newman (Melissa Ordway) is closed early to focus on her get together with Nate Hastings (Sean Dominic), who wonders why she won’t call it a date. Abby blurts, “Date. Date, date, date.” She admits it’s a scary concept given she her recent broken engagement. Nate hasn’t had the best of luck dating either.

They trade bad date stories over wine. Nate’s putting himself out there again because he found someone worth it. He wasn’t ready before. He relays Neil Winters left him his penthouse and a seat on the Hamilton-Winters board. Abby muses that can be very powerful and sexy. Later, Abby says goodnight with a chaste kiss and Nate leaves with a smile, pausing to look back in through the window.

Next week on #YR, Billy and Victoria make things official, Adam reaches out to Phyllis, and Nikki confronts Victor. pic.twitter.com/ObMtK22mll

In the tackhouse, Adam Newman dreams that Chelsea Newman is there, but the woman turns and is Sharon Newman. She’s the one who is there now and Chelsea is gone. Adam kisses Sharon after she suggests he loves them both. They undress and he ravishes her on the couch until a gunshot rings out and Adam awakens with a start. He walks to the door and looks toward Sharon’s house. After, Adam gets a call from a man who tells Adam he was right, the woman he is looking for isn’t dead. He’s found Chloe Mitchell (Elizabeth Hendrickson).

At Y&R’s Sharon Newman’s house, she takes a call from Chelsea Newman and tells her there’s something she needs to know. And that’s a wrap. Don’t forget to check often with Soap Opera Spy for all your soap needs!

Days of Our Lives Spoilers & Recap Friday, May 31: Jack Has A Memory – Will’s Condition Worsens